Windows 8.1 Catches Up With XP In Total Users

Windows 8.1 Catches Up With XP In Total Users

Windows 8.1 has finally inched past Windows XP in terms of total number of users. To put that in perspective, it’s taken almost 2 years for Windows 8.1 to overtake an operating system that’s 14 years old.

According to web tracker Net Applications, web traffic coming from desktop operating systems showed Windows 8.1 occupied 13.1%, while Windows XP sat at 11.9%. And according to StatCounter, Windows 8.1 actually pulled ahead of Windows XP in December last year, and has continued with a slow but steady increase. 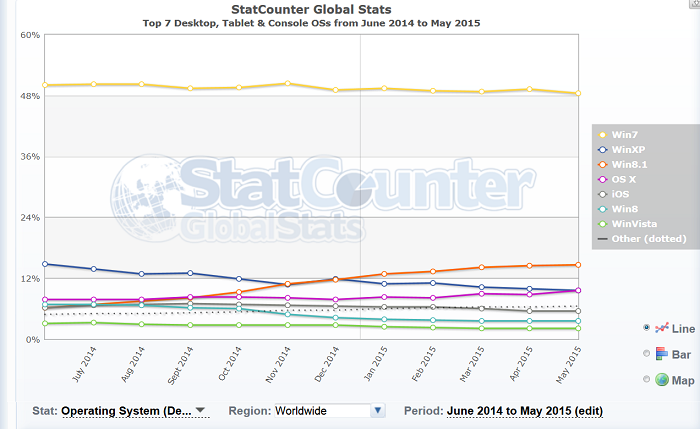 Although both statistics counters show slight variations, they both agree that Windows XP usage has steadily dropped over the past few months while Windows 8.1 usage continues to slowly rise. In fact, Net Applications actually shows that Windows XP usage plummeted from 14.6% last month to its current 11.9%. Windows 8, meanwhile, sits at fifth place behind Mac OS X Yosemite for desktop operating systems.

Microsoft ended its support of Windows XP in April 2014, bringing the era of what is arguably the world’s most iconic desktop OS to an end. It’s worth mentioning here that anybody still running Windows XP is doing so at great risk. Without updates and fixes, Windows XP is not secure and should not be used for anything remotely important.

So why are people suddenly starting to like Windows 8.1? Well, that’s probably not what’s happening. The rise in Windows 8.1 may be attributable to the upcoming release of Windows 10. Windows 10 has been promised for free to all Windows 7, 8, and 8.1 users. With Windows 7 no longer being sold brand new, the easiest way to secure a copy of Windows 10 right now is to buy Windows 8.1 and put up with it until the upgrade.

Windows 10 will be one of Microsoft’s most important operating systems yet. The company is hoping to win back some of the people turned off by Windows 8, particularly in the desktop demographic. The new OS has actually been available as a technical preview since October, so you can grab it now if you’re so inclined. It actually registered in the statistics as a 0.16% blip.

Oh, and in case you forgot about it, Windows Vista is still in there, just hanging on at around 2%.

Apple Fires Shots at Spotify with Apple Music Service
Jolla’s Sailfish wins in face of Android and Tizen, at least for Yotaphone