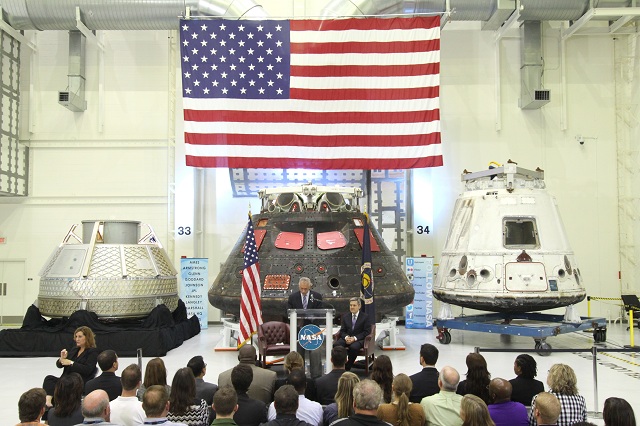 The good folks over at NASA are constantly working on new and ambitious projects that more often than not require large sums of money to turn into reality. Although the space agency has a pretty substantial budget, it’s not quite enough to fund all these projects. Fortunately, the Obama administration recently decided to give NASA a “little” boost of $500 million for the fiscal year 2016, which amounts to a total budget of $18.5 billion. That’s certainly quite a lot of money, but the agency will put it all to good use according to NASA Administrator Charles Bolden.

Bolden broke the good news on Monday during a state of the agency conference held at the Kennedy Space Center in Florida where he also revealed some new details regarding NASA’s plans for the future. One of the first orders of business will be to continue the work on the project that will send people to Mars in the next decade. Though the first humans are not expected to set foot on the Red Planet before 2024, the Orion deep space vehicle that will take them there already underwent its first successful flight test back in December of 2014. “NASA is firmly on a journey to Mars,”Bolden said. “Make no mistake, this journey will help guide and define our generation.” Speaking of the Red Planet, NASA will use some of the funds to continue their work on the improved Mars Rover that’s expected to be launched in July 2020.

NASA also announced a mission with the goal of exploring Europa, one of Jupiter’s largest moons. Researchers have been trying to come up with the best way of approaching this project for a while now and they will finally be ready to take the next important step later this year. “Looking to the future, we’re planning a mission to explore Jupiter’s fascinating moon Europa, selecting instruments this spring and moving toward the next phase of our work,” Bolden explains. The current mission concept goes by the name Europa Clipper and involves an unmanned spacecraft that will orbit around Jupiter and attempt several flybys of Europa over a period of three year. The goal here is to map the surface of the moon similar to how the Cassini probe did with Saturn’s moon Titan. However, this particular mission is of more interest to NASA as Europa is believed to hold oceans of liquid water beneath its icy crust and it is there where we might find the first signs of life outside our own planet.

Needless to say, these are some very interesting projects, but NASA has a few more in the works. These include launching the James Webb Space Telescope (successor to the Hubble telescope) in 2018, sending commercial crew vehicles to the ISS via its commercial partners Boeing and SpaceX by 2017, and further developing the ambitious Asteroid Redirect Mission, which has the goal of bringing a small asteroid into lunar orbit for research purposes.