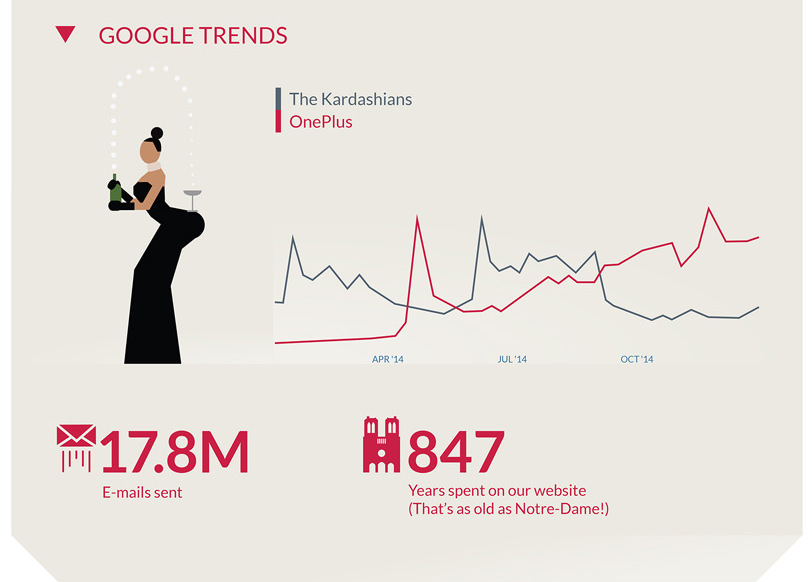 OnePlus have unveiled their annual report card and the neat charts inform us about how popular, shipped and flown the OnePlus One was in the past year. One funny and surprising comparison the company made was with the Kardashians, saying that the popularity of OnePlus was much higher than that of the Kardashians at the end of 2014. While that hilarious statements isn’t really relevant to the annual report, it does demonstrate that OnePlus has grown more than anyone could have expected.

OnePlus does not advertise. That doesn’t mean you won’t see them on social media, but it does mean that all the hype around the OnePlus One was created by us, the fans. The flagship killer, as the OnePlus One has been dubbed, was one of the most surprising devices of 2014. The popularity of the handset grew by word of mouth and social media immensely and has come to be famous and infamous at the same time, something you don’t see too often.

The majority of the customer based of the One seems to be concentrated in East Asia, followed by Europe, then North America and lastly, India. 39% of the One units shipped in 2014 were headed to East Asia, which means that OnePlus has become a serious competitor to Xiaomi, Huawei and Meizu this year. Even though it’s a small, new company, this one is headed for the top fast. We already know that OxygenOS and a new R&D store in Europe are on their way, not to mention the next flagship killer which is supposedly in development already. We’re seeing big things in the future for this start-up.

According to the OnePlus annual report, the company managed to make $300 million in revenue, which is awesome for a company of 88 people, who doesn’t even sell their flagship directly. The One became popular in part thanks to the invite system, which was acclaimed and criticized in equal manner. The company in turn has overtaken Google Trends and became even more popular than Kim Kardashian, which is no small feat, as those champagne-coated shiny things are a feast for most eyes. The company saw a swift rise in popularity in May, when people started ordering and receiving their OnePlus One handsets, after which there was a period of steady growth right up until the end of the year, the company’s popularity peaking at the end of 2014 when the OnePlus Two was confirmed.

The Chinese company also boasts with 134 pizzas ordered at their HQ while sorting out bamboo cover and OxygenOS ROM-related things, not to mention 357 foosball games played and an average working day of 12 hours. We’ve all known that the small company is diligent and means well, but we didn’t think they were as nice as their report portrays them. Props for OnePlus and we are glad that Carl Pei’s startup company managed to get ahead and become one of the most popular companies on the internet. We wish the company all the best and are looking forward to the Two, as well as other innovative products they might have in mind!