Overseas contraband has been a big issue in international affairs for a long time now, with governments trying to weed out the illegal transportation of tobacco, alcohol and drugs, without any luck. Contraband is one of the day-to-day occurrences that is as hard to stop as theft or embezzlement. MIT researchers have come up with an underwater robot that can detect contraband attached to the bottoms of the ships that carry them, making a real advancement in the prevention of contraband. 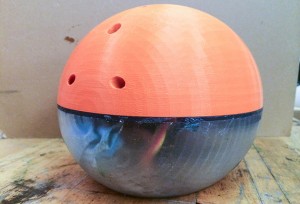 The bottom part of the underwater robot houses the electronics, while the top part houses the propulsion system.

Contraband is not only a threat to a country’s economy, but it is a threat to consumers as well, since all contraband material will not come with guarantees, warranties or any certainty that the product is safe whatsoever. That is why MIT researchers have started working on the underwater robot that will help law enforcement and customs agents detect illegal cargo on ships without being noticed by the perpetrators. With the use of an underwater robot, there could be many costs and risks minimized for government agencies and law enforcement as well.

The underwater robot was created with the purposes of keeping ports safe and making customs checks easier on officers, as well as undetectable. The robot is about the size of a football, and it has the ability to swim around a ship or a boat and detect hollow spaces where contraband could be hidden. The underwater robot uses ultrasound scans to collect data and it was originally designed to detect cracks in nuclear reactor water tanks. The underwater robot has an oval shape with a flat panel on the side used as the scanning device. Although the underwater robot is pretty obtrusive and would stick out in an average ocean environment, MIT researchers say that the mechanism it uses leaves no wakes or ripples behind it and its shape allows for easy camouflage in algae or marine plants. 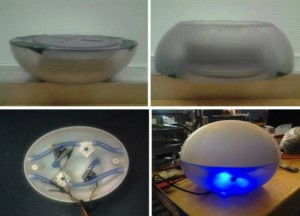 The insides of the underwater robot.

The underwater robot seems to be rather easy to make and will not cost a fortune like other robots do, with a price tag of around $600. The robot can be 3D printed and the device consists of a waterproof part which houses the electronics and does the actual scanning, whilst the other part is permeable and houses the propulsion system which pumps water in order for the robot to move around. The low price tag and easy manufacturing would make the underwater robot a good investment for port security because it could be sent out in swarms to sweep the ships coming without them even noticing their presence. The robots could do a collaborative inspection and send the data to the ports without the risk of being caught red-handed. 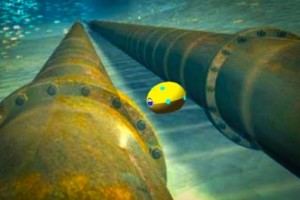 This is how the underwater robot will look like when scanning objects.

The battery in the underwater robot lasts for about 40 minutes and the robot can travel about a meter each second, so the time it has available lets it scan at least three smaller ships. If the underwater robot can be sent out in swarms, with groups of robots doing the inspections in the port while other groups sit back at the port, recharging, the 40 minute battery life should not be a problem. At least not for now, since the robots are still in development. They will probably be capable of wireless charging when the prototypes will be finished and will be able to perform ultrasounds without making surface contact with the object they are scanning (usually necessary for an ultrasound).

The underwater robot is not yet finalized, but if the technology MIT researchers use will allow it, the robot can become quite handy over time. The robots could detect structural defects, nuclear weapons, firearms or even check radiation levels. You can even imagine these robots routing traffic around in ports by communicating with each ship in the port and with all the underwater robot units assigned to their areas. It’s an interesting prototype and it will surely bring a lot of innovation into port security protocols.