Kangaroos are the Supervillains for Driverless Cars 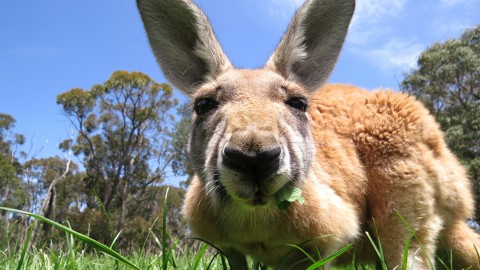 Kangaroos are the Supervillains for Driverless Cars

Kangaroos are the supervillains in the continued development of a driverless car detection system. Who knew? Well, perhaps everybody living in Australia where there are over sixteen thousand vehicle accidents every year involving kangaroos.

A top priority for all makers of driverless cars is a detection system so the vehicles do not hit pedestrians. Any detection system also must have the ability to detect animals. Around 200 people die yearly in the United States in collisions with wild animals. Furthermore, an estimated 1.5 million collisions with deer occur yearly. These incidents cost over $1 billion and tens of thousands of injuries. Moose are the major wildlife obstacle in Sweden where there is an average of 20 collisions each day.

Researchers are working to overcome a major issue. Any working algorithm needs to predict behavior once detection occurs so as to avoid hazards. Development of systems to detect pedestrians are quite successful. However, human behavior is relatively easy to predict when compared to animal behavior.

Volvo has successfully solved the moose problem in Sweden with the development of their Large Animal Detection System. However, a recent report states that kangaroos are currently foiling the distribution of driverless cars in Australia. According to David Pickett, Volvo’s technical manager in Australia, the unusual locomotion employed by kangaroos continues to foil the system: “We’ve noticed with the kangaroo being in mid-flight when it’s in the air, it actually looks like it’s further away, then it lands and it looks closer.” Current detection technology that includes the predictive algorithms are unable to account for the change in perspective. Volvo’s goal is to solve this issue by 2020.

Detection and prediction systems in cars are not the only solution currently in development for roadways worldwide. One solution is to embed sensors into the roads themselves, effectively creating “smart” roads. The sensors detect hazards and then alert all nearby vehicles, at which time the vehicles computer reacts appropriately. Other solutions include additional fencing and green overpasses or tunnels on migration routes, both of which are already quite common.

The ambitious agenda to make driverless cars common on roadways across the world is closer to reality every day. Soon enough, we’ll be playing video games and having our spot of tea while on the road. Hopefully by then, kangaroos will decide that supervillianry is best left to the seagulls.