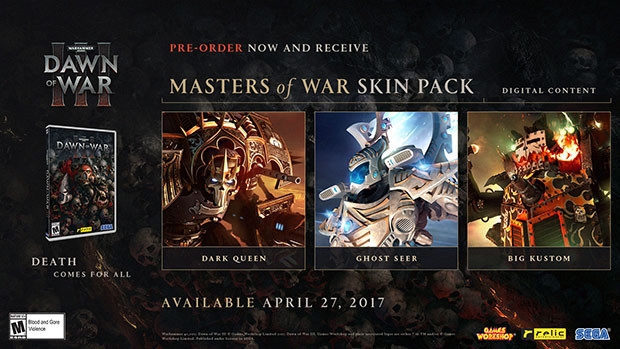 The Space Marines, Orks, and Eldar are at it again in Relic Entertainment’s April 27 release Warhammer 40,000: Dawn of War III. If the the game looks intriguing or you were impressed by this last weekend’s open beta but the standard $59.99 fee has you on the fence, consider the retailers offering discounts up to 25%.

All of the above retailers are shipping Steam keys of course. So far it is confirmed Bundle Stars and DLGamer are shipping keys. It is certain you’ll get your key at those retailers near instantly after purchase and can begin the pre-load. The download is not exactly light, as after installation the game will take up 50GB of hard drive space.

Pre-ordering Warhammer 40K: Dawn of War III before Thursday gets you the Masters of War Skin Pack. The pack isn’t a huge deal but does include cool looking skins for the Dark Queen, Ghost Seer, and Big Kustom Super Walkers.

All the above retailers include the Masters of War Skin Pack except one. GMG makes no mention of the skin pack in their description, so it is unconfirmed you’ll receive it.

For gamers looking for the old school feel of a physical disc, you can buy directly from the Relic Store and get either the Limited Edition or Collector’s Edition. They go for $59.99 and $129.99 respectively, which is quite a bit more than the digital copies above.

The sixty dollar Limited Edition includes a physical disc, official game soundtrack, and art card. The one hundred and twenty dollar Collector’s Edition also includes a Godsplitter Daemon Hammer statue and cloth banners for each of the three factions.