Cross-platform Vector smart watch gets a month of battery life 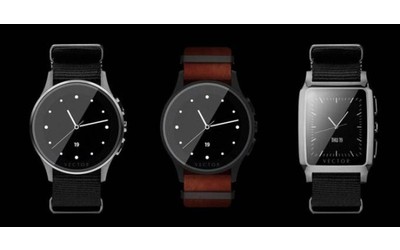 Cross-platform Vector smart watch gets a month of battery life

Baselworld saw the unveiling and announcement of many luxury smart watches from Tag Heuer, Gucci and Martian, but another company that didn’t get as much hype also launched two new Vector smart watch models, the Luna and the Meridian. There’s not much official information available about the Vector smart watch or its features, as the demonstration at the show in Belgium was rather short. The prototypes that were shown off were rather stylish and functional, although it wasn’t clear what kind of software they were running on.

The Vectro smart watch is a cross-platform device which will reportedly work with Android, iOS and Windows operating systems on mobile devices. That’s a feature not many high-profile companies include in their wearable devices, as each aims to create its own exosystem of devices. The Vector smart watch is among the few which will work with any platform of the user’s choosing, which will surely prove a strong-point of the wearable. If you’re curious about the devices, you can watch a hands-on video on Youtube.

But there’s more, actually. According to the company producing the Vector smart watch, the device will have a staggeringly long battery life of a month or so, which is something remarkable for a smart watch these days. Android Wear watches usually don’t make it past two days, while the Apple Watch has a surprisingly low battery life of about 18 hours, according to Tim Cook, Apple CEO. The Vector smart watch aims to change that with the month-long battery life that is advertised, although it is not clear if that long-lasting power will stand when the device is heavily used.

According to the company, the Vector smart watch will feature all the rudimentary properties seen on other wearables, including fitness tracking, notifications and an IFTTT-based system that will be customizable through a paired smartphone. The Vector Luna is the round version of the timepiece, while the Meridian is rectangular in shape. Both these smart watches will be rather affordable, according to Engadget. The Vector Luna will cost $350 for the base model with either a black nylon or brown leather strap, while the Meridian will cost $200 with a black nylon strap. These are the base models, but there will be different types of the Vector smart watch available in the future that will cater to those looking for something more premium, more similar to the newly launched Apple Watch or LG Watch Urbane.