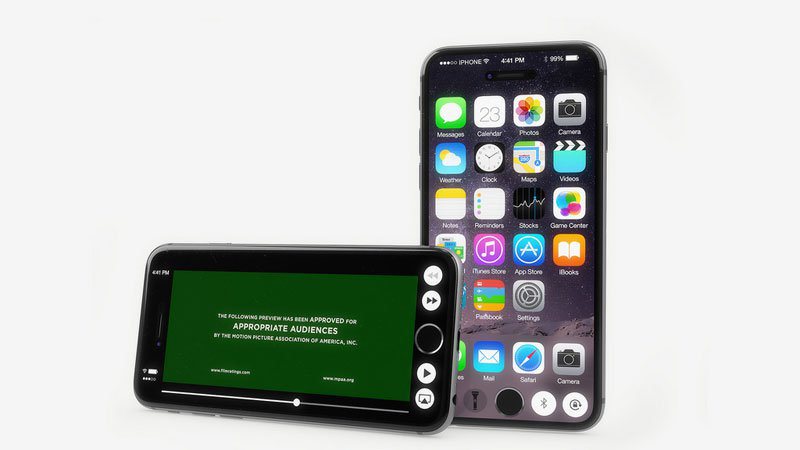 The iPhone 7 is going to be the next big thing from Apple, if the iPhone 6S doesn’t come along before that is. Although there’s not much info out there readily available about the iPhone 7, its specs, display, battery or new features, we do have a whole bunch of rumors and leaks to base at least a concept device on. Since we’re not graphic designers and I for one suck at Photoshop, we will try painting a picture with words this time around. In the future, when talking about the iPhone 7, we will hopefully have official images at our disposal.

The iPhone 7 will most likely aim to gather more and more users from Android, so iOS 9 will be a big part of the new Apple smartphone. Apple aimed for performance with the iPhone 6, iPhone 6 Plus and iOS 8, and we suspect the company will aim for features and performance with the iPhone 7, so iPhone 7 specs are what we’re most curious about. Samsung is reportedly prepping the new Apple A9 64 bit chipset for the iPhone 7 and rumor has it it will be at least as powerful as the Snapdragon 810 and the Exynos 7420 CPU that we can find in the Galaxy S6. At least, if not more that is. Apple is known for great performance and we expect the iPhone 7 to keep that tradition alive.

iPhone 7 specs will most likely include Touch ID, but not in the conventional form that we are familiar with, instead with a fingerprint sensor embedded on the display itself. That being said, we can imagine three possible scenarios for the iPhone  display and Touch ID at this point. The first scenario involves Touch ID on the iPhone 7 display itself, with no home button to accompany it. Instead, the phone will be bezelless and thin and there will be a power button on the side for easy access in case the fingerprint sensor on display is not working. The second scenario involves a more traditional approach: Touch ID embedded in the home button. The third scenario is a split: either Touch ID on the display and a joystick instead of a standard home button, or Touch ID in the home button that doubles as a joystick. Apple filed a patent for this type of technology, so it’s actually a possibility. The degree of possibility, however, cannot be estimated right now. We’ll get back to you on that.

Since Apple wants to improve, much like every other smartphone manufacturer, we expect iPhone 7 specs to be over the top. That means a higher resolution display, possibly QHD, a super-fast Apple A9 processor with fast charging, wireless charging, a better storage, such as the Galaxy S6 storage, 3 GB RAM, up to 256 GB internal storage, and a solar charging case straight from Apple. Moreover, the iPhone 7 camera will be getting an improvement as well, if rumors are correct, to 13 MP on the rear and 5 MP on the front, which would be pretty neat. The same sources point out that the improved camera will be accompanied by optical image stabilization and laser autofocus.

The iPhone 7 display has a pretty good shot at being QHD, as there are rumors of Apple getting into virtual reality. If Apple wants to do the Google Cardboard challenge, as Samsung did, the iPhone 7 will need a high resolution display so that the VR experience is as immersive as possible. Which is why, in my opinion, QHD is definitely a must, if not for the iPhone 7, at least for the iPhone 8. If Apple wants in on virtual reality, it has to get it while it’s hot: now. Although these are just rumors, the increasing demand for virtual reality by consumers and otherwise points towards a big market in the future, and Tim Cook will most likely want to get in on.

It seems like most rumors and leaks about the upcoming Apple flagship concern display. According to various analysts from across the world, the iPhone 7 display will be made out of sapphire glass in one variant, to provide sturdiness and better protection. Moreover, the iPhone 7 display will feature Force Touch and a new technology to make the experience even more immersive. We’re entirely happy with the LED-backlit displays on the iPhone 6 and 6 Plus, so there isn’t too much need for improvement on that front, but it could be something really neat. Otherwise, sources say that the iPhone 7 will have more color options, including a rose gold one that would match certain Apple Watch Edition units. Sounds interesting, and pretty plausible, so we’re confident at least in the color options. The rest of the story should be taken with a grain of salt, as we’re still awaiting on news from Apple. We hope they spill the beans, because people are getting really curious.