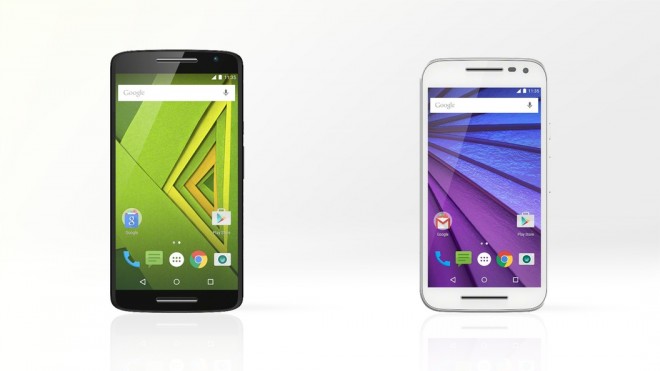 In 28th July 2015, Motorola announced the release of two Moto X series smartphones and the expected Moto G 3rd generation. Motorola Moto X Style or Pure Edition as it is known in the US, was the leader of the announcements and was set to be released in September. At a better price range, with some specifications differences, Motorola set the Moto X Play launch date to mid-August and although it goes under that name internationally, in the US it is sold as the Verizon Droid Maxx 2. The affordable, yet very improved Moto G was released right after its announcement in July and by now people are starting to realize that other than the price range, Moto X Play and Moto G 3rd gen don’t have significant differences.

Both phones come in similar designs and if until this year only the Moto X series offered the Moto Maker option, now the Moto G series can also be customized through the option, letting you choose the front, back and accent colors for your device.
As for the smartphones bodies, Moto X Play is slightly larger and slimmer. Moto G’s dimensions are 5.59 x 2.85 x 0.46 inch (142.1 x 72.4 x 11.6 mm) while Moto X Play size is 5.83 x 2.95 x 0.43 inch (148 x 75 x 10.9 mm). As the dimensions slightly differ, the X series smartphone weights a little more, but gains extra points by using a Nano-SIM card, while the G series phone is still built for Micro-SIM.
A big difference between the two comes in their building material, the Moto G phone taking a lead. The Moto X Play smartphone has a water repellent nano-coating which is IP52 certified, but the Moto G is IPX7 certified, which means it is waterproof and it resists 30 minutes immersed in water.

The Moto X Play has a 5.5” display with 1080 x 1920 pixels resolution allowing 1080p Full HD streaming, while Moto G offers a 5” display with 720 x 1280 pixels resolution and 720p Full HD streaming. Although the displays quality is slightly different, their display type and protection is the same. Both phones have an IPS LCD capacitive touchscreen with 16M colors and Corning Gorilla Glass 3 built display protection.
Both smartphones have 5 MP Front cameras, but the Moto G front camera also offers features like Auto HDR and Display Flash. As for the Moto X Play, it wins by having a 21 MP (5248 x 3936 pixels), highly performant rear camera, while the Moto G 3rd gen rear camera was only upgraded to 13 MP (4128 x 3096 pixels). Both rear cameras offer features like auto-HDR, geo-tagging, face detection, touch focus and panorama and when it comes to video settings, Moto G and Moto X Play can capture 1080p HD video (30 fps).

Keep in mind that from the start the Moto X series were built to be more performant than their more affordable G series, but as of this year the 3rd gen’s performance starts to get close to the least performant smartphone of the X series.
Motorola Moto G has a 64-bit Qualcomm Snapdragon 410 processor with a quad-core 1.4 GHz Cortex-A53 CPU combined with the Adreno 306 graphics processor and it has 2 storage options. The Moto G can either have 1 GB RAM with 8 GB storage or 2 GB RAM with 16 GB storage, both versions supporting up to 32 GB microSD cards.
On the other hand, the Moto X Play comes with a 64-bit Qualcomm Snapdragon 615 processor with an octa-core 1.7 GHz Cortex-A53 CPU coupled with the Adreno 405 GPU. As for storage, Moto X Play has 2 GB RAM with either 16 or 32 GB storage and can support up to 128 GB microSD cards.
By having a more advanced processor the Moto X Play will be faster, but when it comes to storage Moto G starts to reach the storage capacity of its rival, although Moto X Play seems to win in that aspect too. But when it comes to connectivity things seem to be tied again. Both devices work with 4.0 LE Bluetooth and 802.11 Wi-Fi, have GPS incorporated and are 4G devices. Also, both smartphones have Micro USB v2.0 and 3.5mm headset jack connectivity.

The 2015 Motorola smartphones come with non-removable Li-Ion batteries, but the difference can be observed in their physical battery capacity. The Moto G 3rd gen is powered by a 2470 mAh battery, officially lasting up to 24 hours with medium usage. The Moto X Play has a 3630 mAh battery that should last up to 48 hours with medium usage, but by taking in consideration its larger Full HD display, let’s just assume it lasts for about a day and a half. Theoretically, Moto X Play should last longer that Moto G, but their small performance and display differences might even up the battery life of the devices.
When it comes down to software, both Motorola devices have the Android 5.1.1 Lollipop Operating System with the added Moto app which allows voice commands, reads out texts while driving and includes other personalized features. Also, both devices are planned to be upgraded to the Android 6.0 Marshmallow OS in the near future.

Conclusion
As expected since their announcement, the Motorola Moto G 3rd generation doesn’t quite reach Motorola’s Moto X Play specifications, but they are pretty close. Although, Moto X Play is faster in performance, has a better quality display and rear camera and it might last longer when considering battery life, the new Moto G seems to be more durable by being waterproof not only water repellent, is now customizable with the Moto Maker option and works with the same Android OS.
When it comes to price ranges, Moto G is still one of the best affordable Android smartphone on the market by being available from $180, while Moto X Play doesn’t quite have a fixed base price and it is ranged between $300 and $400.
In my opinion, Moto G 3rd generation is an excellent and affordable smartphone and it comes close to the Moto X Play’s specifications. Even if Moto X Play is a very performant smartphone, its price seems a little too much, considering the fact that Moto X Pure Edition (Style) has even better specifications and starts from $400.