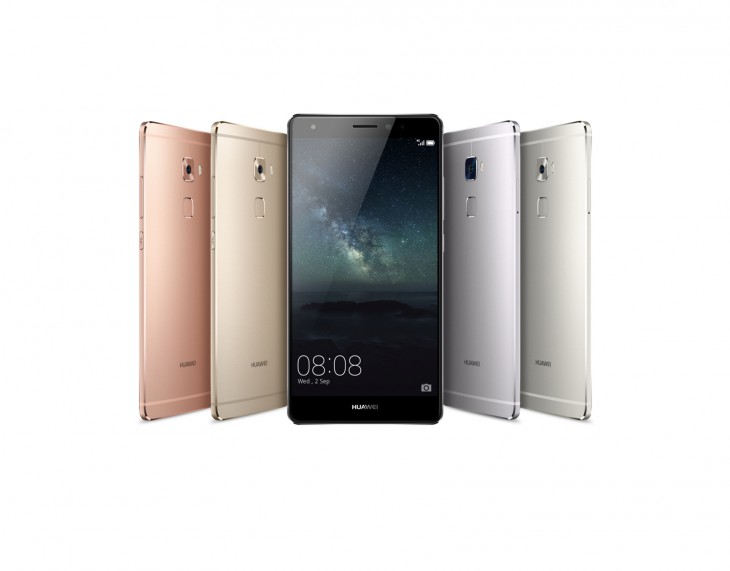 At the IFA Berlin show today, Huawei unveiled their latest device, the successor the Huawei (Ascend) Mate 7, a beast of a phone with excellent reviews. The Huawei Mate S is the new device, although we would have expected the Huawei Mate 8 name instead. You can check out the official press release, too.  With the launch, the question rises: can the Huawei Mate S have something to do with the Nexus 6 2015?

Google is supposed to launch their new Nexus line-up this month, after announcing that both LG, who made the original 2013 Nexus 5 and Huawei will be part of the new launch. The Mountain View giant hasn’t revealed much about what to expect of the new Nexus line-up, but we can take a look at the Huawei Mate S and get a good of what Huawei can do this year and what we should expect from the Nexus 6 2015.

The Huawei Mate S keeps a lot of the aesthetic of the Mate 7, but adds a lot more metal and chamfered edges to the build. The all-metal body of the device is decorated similarly to the iPhone 6 Plus and the Galaxy S6, with antennae lines slashing across the top and bottom of the phone. On the rear of the device, Huawei added a fingerprint sensor that is supposed to be as accurate as Touch ID or as Samsung’s sensor in the Galaxy S6 and Galaxy S6 Edge. The color schemes that the Huawei Mate S will be available in are pink, gray, champagne and gold.

Since this year manufacturers were uncommonly focused on making their devices lightweight, thin and easy to use, that’s what Huawei did as well. The Huawei Mate S is a superthin phone with a lightweight, rounded body. At it thinnest point, the device measures just about 3 mm, while it passes the 7 mm mark at its thickest point. No laughing matter, as the handset turns out to be quite impressive to handle and the company seems to have nailed the design moreso than they did last year.

Last year, the Huawei Mate 7 impressed a lot of people with its specs, design and price, and that’s what the company is trying to repeat with the Huawei Mate S. The large 5.5-inch display of the device comes with an FHD resolution of 1080*1920, adding up to 401 ppi pixel density, the same as on the iPhone 6 Plus. With Sony launching the first 4K display on the Xperia Z5 Premium, it might seem odd to see a flagship device with an FHD display, but it’s for the better, trust me. The display is bright, crisp and adaptive and it looks just as good as a QHD display. The upside is that it probably won’t use as much power and will most likely become one of the best phablets in the market when judging by battery life.

But Huawei did a lot with the Huawei Mate S when it comes to one-handed use: the fingerprint sensor is not just a fingerprint sensor, instead being customizable to act as a power button, erasing notifications, placing and ending calls and more, which has not been seen on any device until now. The phone’s design and a couple of software features like the knuckle tap to open apps or take screenshots emphasize the company’s desire to make the phablet easy to use even with one hand. That’s not something one would have said about the Nexus 6 last year.

Huawei Mate S specs  include an octa-core HiSilicon Kirin 935 CPU, 3 GB RAM and either 32 or 64 GB internal storage. The device also comes with a microSD card slot that doubles as a second SIM card slot which can hold cards with up to 128 GB extra storage, so expansion is entirely possible on this phone, which is a feature many Android users will appreciate. Many have said manufacturers botched up when removing microSD card support and removable batteries (Samsung, this is about you), and now they’re open to new suggestions and Huawei positioned the Huawei Mate S right in front of them.

One of the other strongpoints of the Huawei Mate S is its camera. The company added a lot of zest into the Huawei Mate S camera and so far, it sounds like one of the best options out there. On the rear, there’s a 13 MP camera that is supposed to provide the user with a DSLR-level experience and results, complete with optical image stabilization and a 4 color sensor, not to mention autofocus and a suite of features in manual mode. The front camera of the handset is made up of an 8 MP camera and a front-facing flash, which is very rare still.

The Huawei Mate S battery life has equal shots at being great and being average, as the phone uses a 2700 mAh non-removable unit. For a 5.5-inch display, that might seem a bit risky, but the company is confident that the upgraded processor and Android 5.1.1 Lollipop will do the job just fine. Unfortunately,  the Huawei Mate S doesn’t come with wireless- or fast charging, which is a bummer and the only flaws that we’ve found in the phone.

Besides these features, the Huawei Mate S comes with the option of a Force Touch display, which is a very interesting concept. Availability of the Force Touch variant has not been disclosed, but we’ve managed to get the scoop when it comes to availability and pricing of the standard model. The Huawei Mate S price is set at 650 euros for the 32 GB version (~$730) and at 700 euros (~$790), which is quite expensive. The device will go on sale this month in Europe, but availability in the U.S. has not been confirmed yet.

Although the Huawei Mate S is definitely an excellent device, the company might have missed its shot because of the high price that they slapped on this phone. People in the U.S. are looking for devices that are just a bit more affordable, such as the OnePlus 2, and the $700+ price tag doesn’t look appealing at this moment. The lack of fast- and wireless charging might also be a problem for people, although that’s not that big of a deal with Huawei devices, as they tend to charge pretty fast.

With all that being said, what does the Huawei Mate S have to do with the Nexus 6 2015? Right now, nothing. But that doesn’t mean that we can’t get a little inspiration from the device and try to pinpoint what the company will be doing for Google. If the Huawei Mate S is any indication, the Nexus 6 2015 will most likely feature the same display with the optional Force Touch, the same camera and image processing module and the same design. What we expect to be changed is the CPU, which might even be a Snapdragon 820 in the Nexus 6 2015.

Other features that the Huawei Mate S might have in common with the Nexus 6 2015 include the fingerprint sensor and the software features that Huawei introduced with the phone to make one-handed use easier. These feature are almost a sure thing for the new Nexus 6 2015 after the original model last year demonstrated that a 6-inch device is too big and too difficult to use. Replacing it with a smaller, yet much more versatile screen could spell success for Google and Huawei.

Last, but not least, the Huawei Mate S gives an indication as to what kind of price we should expect from the Nexus 6 2015. While the LG-made Nexus 5 2015 will most likely be the cheaper option, with a price estimate around $500, the Nexus 5 2015 price will most likely be at around $600. We would like to be pleasantly surprised by the price, but we won’t know for sure until Google comes clean about their new Nexus line-up. Still, there’s a lot to look forward to and the Huawei Mate S demonstrated that this Chinese company knows what’s up.