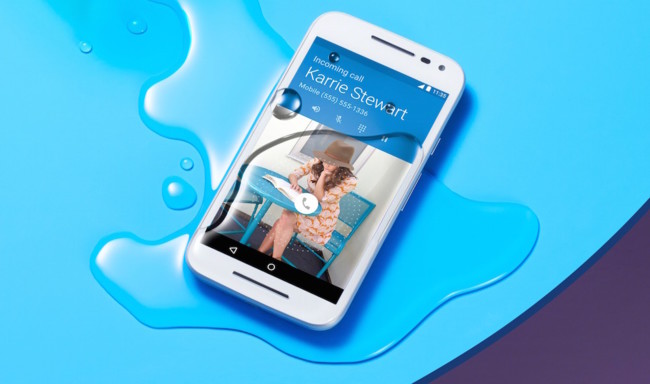 Motorola unveiled the Motorola Moto G 3rd generation this Fall, but apparently, the company thought it would be neat if it went down the Samsung road and release multiple variants of the handset. Today, the company officially unveiled the Moto G Turbo in Mexico as the power user’s smartphone. Focusing on improvements to the performance of the device more than reinventing its design, Motorola launched the Moto G Turbo in response to demand of affordable, yet powerful smartphones in emerging nations as well as in the U.S.

On the outside, the two most recent mid-rangers from the now Lenovo-owned company aren’t that much different. The Moto G Turbo bears exactly the same design and fits into the same footprint, too. Despite the striking resemblance, the Moto G Turbo is very different from the Moto G and adds a couple of features that will surely raise interest in the new handset. At the same time, it has the potential of raising awareness about the company’s mid-range smartphones and reinforcing the company’s dedication to providing a good experience to customers. Working on getting the software updates in line would have been more appreciated by owners of the company’s handsets.

The Moto G Turbo replaces the Moto G’s water resistant IPX certification with an IP67 certification, which makes the phone waterproof up to 1 meter and 30 minutes as well as dust-proof. The change is small, but significant and those with active lifestyles will appreciate the extra durability that the upgraded certification offers. Those eyeing the Moto G might also want to reconsider for this variant, although the Moto G Turbo price will be higher than the Moto G 3rd gen price.

The display of the Moto G Turbo might look the same from a distance as the one on the original model, but it’s in fact a higher resolution 5-inch 1080*1920 panel with Gorilla Glass 3. Compared to the 720*1280 resolution of the Moto G, the new handset takes the viewing experience on a mid-ranger up a notch. Dual microSIM slots have also been added to the Moto G Turbo and the supported microSD card storage has been raised to 128 GB, a lot more than the 32 GB limit of the Moto G card reader.

Even though rumors said that the Moto G Turbo would come with Android 6.0 Marshmallow out of the box, today’s launch event revealed that it is still going to run on Android 5.1.1 Lollipop. It will, however, be updated at the same time as the Moto G, according to our sources. When Motorola is going to actually release the update is uncertain, so don’t hold your breath. Still, the improved hardware within the Moto G Turbo should improve user experience compared to the original model.

Replacing the Moto G’s Snapdragon 410 CPU is the Snapdragon 615 CPU, backed by 2 GB RAM and 16 GB storage in the Moto G Turbo. The original model’s processor didn’t allow for fast charging of the battery, which is now featured in the newer handset. At the same time, the Moto G 3rd gen is available in two configurations, one with 1 GB RAM and 8 GB ROM and another with 2 GB RAM and 16 GB ROM. The newer, better processor should make a difference in performance, as well as autonomy, even if the battery is of the same 2470 mAh as on the Moto G.

The camera setup of the Moto G Turbo remains the same, featuring a 13 MP sensor on the rear with autofocus and dual-tone LED flash and a 5 MP camera on the front of the device, featuring auto-HDR, just like in the Moto G. Photos and videos should end up looking the same no matter which Moto G they were taken with, although post-processing and the camera app’s speed could see improvements in the Moto G Turbo. We can’t pronounce ourselves about that just yet, because more testing needs to be done.