Microsoft’s Surface Pro 4 and new phones to be revealed 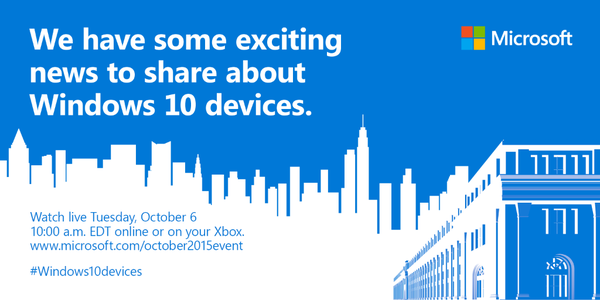 Microsoft’s Surface Pro 4 and new phones to be revealed

Invitations are already out for Microsoft’s press event on 6th October at Moynihan Station, New York City. There are rumors that Microsoft is prepared to reveal a series of hardware that run on Windows 10. The devices that are expected to be unveiled are Surface Pro 4, Lumia 950/Lumia 950XL smartphones and Microsoft Band. Microsoft hasn’t exactly revealed what the hardware event is about other than the fact that all devices will be Windows 10 powered. Everybody is expecting Microsoft to showcase a replacement to the Surface Pro 3.

The most likely devices to be announced are the 2 new Lumia Smartphones which have their specifications and some images already leaked. Of course the focus point is on the Surface Pro 4 which probably won’t be that different from Surface Pro 3. The charging mechanism and form factor will remain similar as promised but that doesn’t mean that other big changes cannot be made. Rumors say that Microsoft wants to add Windows Hello support to the new tablet but it is very unlikely that they will be able to fit an Intel RealSense camera into the device. What users expect is a fingerprint scanner on the Surface keyboard. The hardware might or might not be thinner or larger and there is a big probability that Surface Pro 4 will be 14″ version.

As for the Lumia Smartphones, everybody is waiting to see how compatible they will be with the Windows 10 mobile ecosystem. Other hardware might be added to the lineup but as Microsoft kept most of the information secret for now we will just have to wait until next month.