Apple released iOS 9 this Fall a few weeks ahead of the iPhone 6S and iPhone 6S Plus launch. After a couple of months, iOS 9 adoption demonstrated that not only did the new version of the OS and the new smartphones convince Android users to switch, but also showed that most users of iOS were quick to upgrade their phones to the new OS. However, iOS 9 adoption has slowed down significantly in the past few weeks as 30% of iOS users remain with iOS 8 or earlier version installed on their devices.

This week, Apple posted their app store checks for developers to be able to analyze, and the charts conclude that in a mere three weeks from iOS 9′ launch, adoption rate was over 50 %, which while in line with previous trends for users, is still surprisingly fast, especially if compared to Android 6.0 Marshmallow adoption rates, which haven’t even reached 10% after 2 months since the new Google OS was launched.

iOS 9 adoption rates, although now slowed down, still showcase the biggest weakness of Google’s ecosystem for Android. The sheer volume of smartphones waiting for updates makes the rollout of new OS version extremely slow, and puts a lot of pressure on Google, Android developers, carriers and device manufacturers, which in turn leads to hasty update releases that are later discovered to be buggy and unusable. 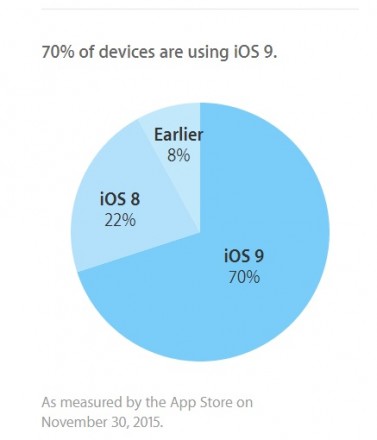 iOS 9 adoption slows, but already at 70%

iOS adoption rates are much better because of Apple’s update policy and because the entire update process on the OS is smoother and easier to cope with. Although iOS 9 adoption has slowed down considerably in the past few weeks, increasing by only 4%, the fact that 70% of Apple iPhone and iPad users are already running the latest version of the OS is admirable, in my opinion. These numbers are even higher than last year, with iOS 8 adoption, but the 10 % difference can be attributed to iOS 8.0.1 and iOS 8.0.2, which were buggy updates that slowed adoption rates to a standstill in October 2014.

Apple’s iOS 9 improved much of the user experience and performance of the OS, but did not focus that much on a visual overhaul of the UI. Being more of an incremental update, iOS 9 demonstrated that fans of the company are eager to see what kind of new features each new iteration of iOS  brings forth, We can’t really say the same thing about Android, where people are afraid to install new updates for fear of bricking their devices. Not a very good reputation so far, Android.