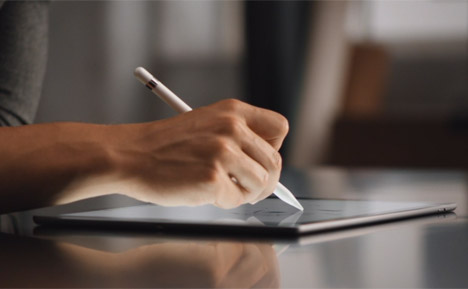 Tim Cook seems to be rather appalled by the “diluted” Surface Book and Surface Pro 4, as the CEO emphasizes that hybrids are devices that don’t have a clear purpose and that idea does not pertain to Apple’s high standards. Windows fans have been used to getting beef from Apple fans, but Tim Cook seems to be angrier than usual at the mixed response the company is getting about the iPad Pro and Apple Pencil. The overwhelmingly positive opinions about the Surface Book might have hit a sensitive chord with the Apple CEO and his cohort, as they felt compelled to reassure fans that Apple would never create a useless hybrid such as Microsoft’s Surface devices.

Not that iPad Pro isn’t a hybrid, of course. It’s running on iOS but Apple is marketing it towards professionals who do a lot of graphical manipulations and design. So the iPad Pro isn’t a hybrid, it doesn’t aim to fulfill tasks you would do with a PC or ultrabook and it doesn’t aim to become a replacement for the Surface Pro 4, with its detachable keyboard and Apple Pencil. Nope, the iPad Pro is definitely not a hybrid. Not even in the broadest meaning of the “hybrid” word. We can take Tim Cook’s word for it.

Moreover, Tim Cook mentioned in an interview with the Independent, that Apple would not create a hybrid between Macs and iPads not now, not in the near future and not even in the distant one. So, as long as Tim Cook’s on top, hopes of seeing a hybrid device (another hybrid device) should be abandoned at the curb. Because Apple doesn’t want to have anything to do with the restricted, niche department that is hybrid devices. Phil Shiller, an exec within the company, revealed that the Surface Book and others of its kind have no future in an interview with Mashable.

It seems to be clear that Apple is not very fond of what Microsoft is doing, and maybe the huge amount of interest the Redmond giant gathered with their new hybrids is a threat to Apple’s market segment. It certainly feels like Tim Cook and his executives feel endangered by a product they still say is useless and without a future. Tim Cook explained the reasons behind their harsh judgment of Microsoft’s recent products and the unwillingness of Apple to go down the hybrid road: “We feel strongly that customers are not really looking for a converged Mac and iPad. Because what that would wind up doing, or what we’re worried would happen, is that neither experience would be as good as the customer wants. So we want to make the best tablet in the world and the best Mac in the world. And putting those two together would not achieve either. You’d begin to compromise in different ways.”

With these statements, the CEO confirmed that there won’t be any devices that would permit for the hybrid name in the future of the company, because Apple wants to make products that clearly state and do what they are supposed to, without taking on additional traits and features from existing products in an attempt to remove one need and replace it with another. Whether they will stay true to this is uncertain at this point. Judging by Apple’s habit of bashing products only to borrow features from it later, our hunch is that we’re definitely looking forward to an ultraportable touchscreen device with a keyboard, kickstand and stylus – but it’s not going to be a hybrid. It’s going to be unique product that will fulfill a need nobody has identified before. Sure.