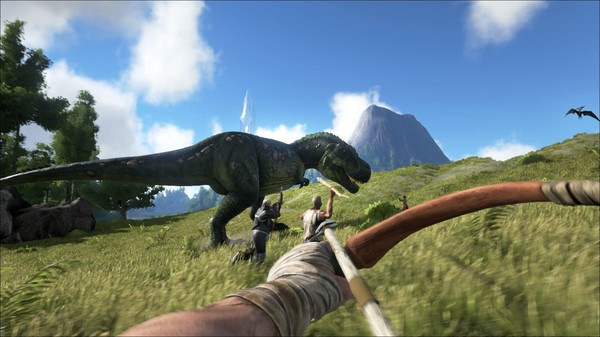 Zombies have become a dominating force in the game industry recently dragging survival horror games to the front. The market has been flooded by zombie titles but what the old school dinosaur survival titles? Series like Turok used to be unbelievably popular and yet now their is a complete lack of dinosaur titles out on the market. Surprisingly a brand new studio is breaking out onto the scene with an open world dinosaur survival title unlike anything you’ve seen before.

Studio Wildcard is a brand new developer so don’t be surprised if you’ve never heard of them or their game ARK: Survival Evolved. Releasing an announcement trailer for the game today, Studio Wildcard has blown all of us away with the quality and size of ARK. A Day Z open world styled game players will be able to work together to survive or throw each other under the bus. The game takes place in a place called ARK island populated by a plethora of ancient creatures.

ARK plants players on the island as either a man or woman naked with no supplies. If they want to survive they will have to work together to find resources or steal from one another. They’re free to explore the entire island looking for ways to build shelter and forge weapons to survive in a terrible hostile landscape. Players will start out learning to build bows and stone hatchets before moving up to increasingly powerful firearms. All so that they can take on the gigantic dinosaurs that dominate the island.

Shockingly though ARK will allow players to do much more than simply kill those big bad beasts for food. The announcement trailer shows off game mechanics where players can tame a number of different dinosaurs to use as riding mounts. Traversing the island on the back of a Stegosaurus, soaring through the skies on the back of pterodactyls,  and thundering along on the back of long necked dinosaurs.

Interacting with the environment is a key part of gameplay in ARK where players will be able to build massive bases and learn the secrets of the island. All of the exploration looks like it will be an amazing experience not simply because of the hulking dinosaurs but the graphics. Despite coming from a indie developer ARK is one of the most stunning games to appear on next gen consoles.

Studio Wildcard has put an immense amount of detail into the worlds environment creating a true sight to behold. Gamers who are itching to get a deeper look at the games online multiplayer, gorgeous graphics, massive open world won’t have to wait long. It will be hitting Steam Early Access on June 2nd.