Fire Emblem If, the new entry of the Fire Emblem series launching soon on Nintendo 3DS in Japan, is definitely one of the more interesting games coming in the future on Nintendo’s portable console. The new game from Intelligent Systems is going to include several new features that will twist several staples of the series such as weapon durability and more.

New details on the upcoming role playing game will be coming later this week thanks to the Japanese magazine Famitsu. The magazine’s website confirmed that new details on the game’s Skills will be revealed this week, as well as more on characters. A new low quality preview image of this week’s coverage has surfaced on the website a few minutes ago, you can take a look at it by going at the end of this post.

The new Weapon Triangle isn’t going to be the all new feature included in the new entry of the Fire Emblem series. It’s been confirmed a while back that Fire Emblem If will include a Phoenix Mode where defeated player’s units are revived on the next turn. This mode has been included by the team so to allow inexperienced gamers to enjoy the game and follow the story. Classic and Casual modes will also be included in the game and they will work like they did in Fire Emblem Awakening.

Fire Emblem If will also be released in North America and Europe on a yet to be confirmed release date. 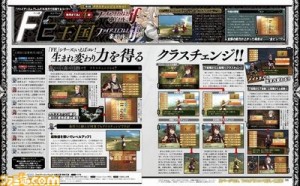