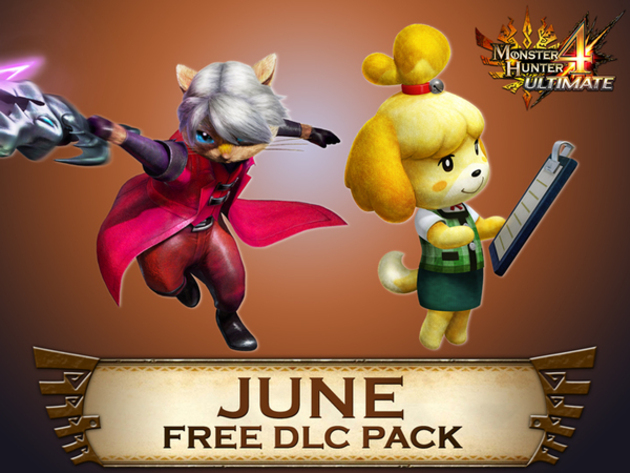 If there’s something that Monster Hunter 4 Ultimate, the latest entry of the Monster Hunter series released earlier this year on Nintendo 3DS in North America and Europe, doesn’t lack, it’s content. The game developed by Capcom is a really massive game filled with monsters to hunt and kill, items to create, quests to complete and much more. Luckily, Capcom doesn’t feel like players already have enough Monster Hunter 4 Ultimate content to experience and so the Japanese company has been releasing free DLC packs every month including plenty of new stuff that further expands the already extensive experience of the latest entry of the series.

The content of the Monster Hunter 4 Ultimate June DLC pack has finally been detailed a few hours ago. The pack includes 14 new quests, 5 new weapons, 1 Complete armor set, 4 palico weapons, 4 palico armor sets, 1 bonus palico called Pink Pal, 3 Guild Card backgrounds and 6 Guild Card titles. Among the new content, the Palico extra outfits are especially interesting, as they are based on Animal Crossing and Devil May Cry. Releasing the Devil May Cry palico costume this month makes a lot of sense, considering that Devil May Cry 4 Special Edition will launch in a few weeks on consoles and PC. A new trailer has also been released today, showcasing the all new content and you can check it out by going at the end of this post.

A new entry of the Monster Hunter series has been revealed recently during the Monster Hunter Meeting 2015. The game will be released this Winter in Japan on 3DS and include new super actions, weapons, moves, areas and monsters. The new base village will be located close to a snowy mountain and players will also have the chance to visit villages from previous entries of the series. As the game has only been announced, there are no news on a possible Western release date.

Monster Hunter 4 Ultimate is now available in all regions exclusively on Nintendo 3DS.