Fire Emblem Fates My Castle, Marriage Features To Be Explained In Detail By Famitsu This Week

Fire Emblem Fates My Castle, Marriage Features To Be Explained In Detail By Famitsu This Week

Fire Emblem Fates, the new entry of the Fire Emblem series known in Japan as Fire Emblem If, has been released in Japan last week and many gamers have been enjoying the latest strategy role-playing game from Intelligent Systems.

As reported in the past month, Fire Emblem Fates comes with several new features such as the My Castle feature, which allows players to create their own base, add a variety of facilities and more, as well as some returning ones, such as the marriage system from Fire Emblem: Awakening. These two features will be explained in greater detail by the new issue of the Japanese magazine Famitsu, which will also reveal some new tips and strategies to make the most out of them. A preview of the Famitsu coverage has been made available on the magazine’s website and you can take a look at it by going at the end of this post.

If you’re among those lucky fans who have been able to purchase the Japanese version of Fire Emblem Fates but cannot read Japanese, you definitely want to check out the unofficial translations for menus, victory conditions for chapters and more that Kantopia has been releasing online. This translation effort is still a work in progress so make sure to keep checking back for more translated stuff from the game.

Fire Emblem Fates has been released in two different versions including a different story path for the second half of the game, a different challenge level and more. The two story paths have been released as DLC so to allow those with the Black Kingdom version to experience the White Kingdom story path and vice versa. A third story path not included in either version is going to be released next month, as revealed by Nintendo last week.

Fire Emblem Fates be released as two different versions in North America and Europe sometime next year. We will keep you updated on the Western release of the game as soon as more comes in on it so stay tuned for all the latest news. 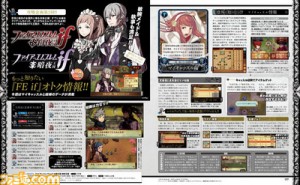