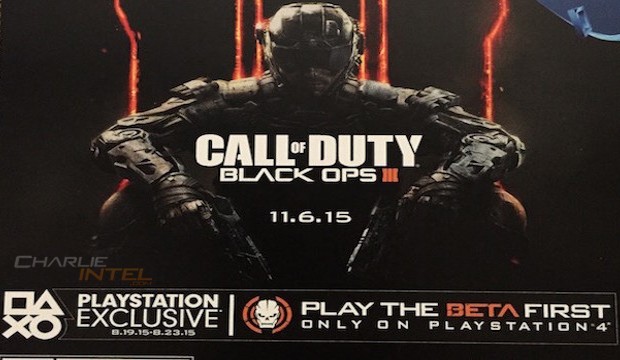 According to Call Of Duty news site Charlie Intel, marketing material has confirmed the beta dates. A flyer was distributed to fans who participated in the Black Ops 3 Zombies Escape Room Challenge at Comic-Con in San Diego. The flyer offered a free 30-day Playstation Plus trial and showed a lot of Call Of Duty: Black Ops 3 branding. The flyer also showed that the beta would go from August 19 to August 23.

Although Treyarch has confirmed that there will be a Black Ops 3 beta for Xbox One and PC, they haven’t announced any details about when those will be. Treyarch announced its deal with Sony at this year’s E3, saying that the Playstation version of the game would receive updates and DLC before other consoles. It’s a similar deal to what Treyarch used to have with Microsoft and the Xbox, but for whatever reason, they moved on to Sony.

You can get access to the Call Of Duty: Black Ops 3 beta by pre-ordering the game through the Playstation Store, Xbox Live Store, or other participating retail stores (which vary by region). To incentivise eager fans, Treyarch has said each retailer will have a limited number of beta codes, so it’s important to get in early. Those pre-ordering the game at retail will be given a code on their purchase receipt or via email, while those buying digitally won’t need a code as the beta will be included automatically on their console. Information about which editions can be pre-ordered in which region can be found here.

New Pokemon Leaked From Upcoming Movie
Bloodborne Update 1.05 To Be Released Later Today In All Regions