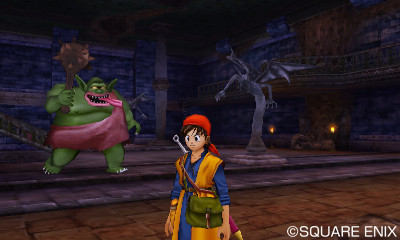 Despite only being an enhanced port of an older role playing game, Dragon Quest VIII 3DS is one of the more anticipated titles in Japan for this Summer. Square Enix is well aware of this and has released today a new trailer for the game to make fans of the Dragon Quest series even more excited for the upcoming new release.

The new trailer, which can be found right below, showcases some of the Dragon Quest VIII 3DS’s more basic gameplay features aswell as costume customization, battles and more. Despite the obvious graphical differences, Dragon Quest VIII seems like it will be a really solid port.

UPDATE: Square Enix has now placed a region restriction on the trailer, making it available only from Japan. We will update the post as soon as another version of the trailer that can be watched all over the world surfaces.

UPDATE 2: Trailer now available for all regions, you can find it here

Earlier this week some new Dragon Quest VIII 3DS screenshots have been shared online, revealing yet more new content that is not available in the PlayStation 2 and smartphone versions of the game. In Dragon Quest VIII 3DS players will be able to explore a brand new dungeon filled with dangerous enemies- The dungeon will end with a difficult boss battle against a genie that will test players’ skills.

Dragon Quest VIII 3DS has yet to be confirmed for North America and Europe but it seems like we will be able to play these two games in English in the near future. Series creator Yuji Horii has revealed during the Japan Expo 2015 earlier this month that Dragon Quest VII and Dragon Quest VIII 3DS will be released in French in the future. If the games are getting a French release, it’s a given that they will be released in English in other European countries and North America.