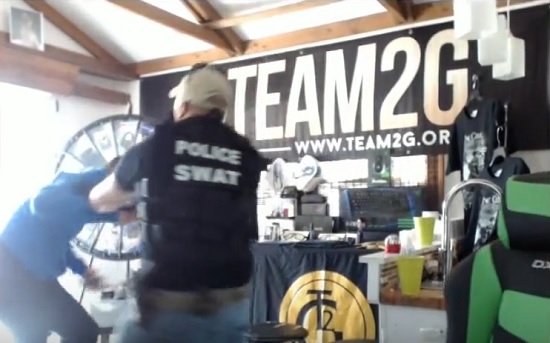 Over the weekend, popular Twitch streamer Trick2g put on a 24-hour long live event to commemorate his channel reaching 800,000 followers. Trick2g, known for his League Of Legends content on Twitch, decided to end his live event with something exciting – by having himself swatted on camera. It was all just a stunt, with the “police” that stormed his room actually being actors. The mock swatting seemed to go down well with Trick’s fans, but by Monday his account was banned.

Swatting, in case you’re out of the loop, is what you get when somebody makes a fake call to the police, saying that some kind of emergency is happening at a Twitch streamer’s residence – usually swatters go with a bomb threat or a hostage situation. The result is seeing a police SWAT team raid a streamer’s home live on camera. Results of swatting can vary based on a streamer’s location and their local police practises. Sometimes, only one or two officers show up with a polite knock on the door and nothing much happens. Other times, a full SWAT team rocks up and points ten assault rifles on the streamer. There was even an incident in which a Runescape streamer’s 10-year-old brother had a policeman hold a gun to his face.

Trick’s swatting event (which you can watch for yourself below) shows the latter scenario. Somebody screams “Police!” in the background and a couple of cops storm into the room. Trick shouts out “What the f***!” before being arrested. He even hits one of the policemen. Trick ends up being tackled to the ground and carted off. Of course, it was all fake. The two men dressed as cops were just actors. Trick’s manager, Cher Gambino, confirmed it was a stunt in a post on Team2g’s website. “An extreme FAKE ending for an extremely entertaining Trick2G.”

“Trick is an entertainer and that is just how it is, he streams 12 – 14 hours a day and brings constant laughter throughout each and every stream,” Gambino said on Trick’s banning. “To take that stream ending serious is absurd, Trick was laughing, the person used was NOT in disguise and was the same person who was on the stream all day yesterday setting up cameras and assisting the stream. The ending was scheduled for 3PM which again if thought process was used in any way, one would know that a swat team would not wait until the end of a stream to engage.”

Gambino says she isn’t sure how long the ban will last, but that she’s working on getting Twitch to lift it. Twitch has so far refused to comment.

Many of Trick’s viewers have responded negatively to the stunt, saying that the mock swatting was making light of events that could be very traumatising to some streamers. Many other fans are showing their support over Twitter.