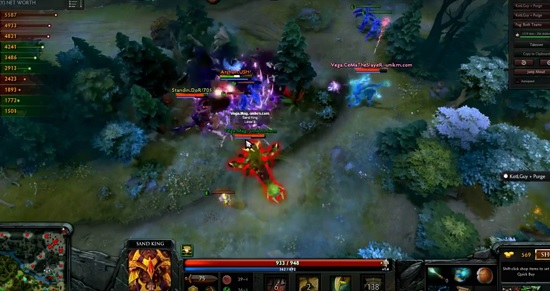 The DOTA 2 International, the world’s biggest DOTA 2 tournament, was interrupted for a few hours by a Distributed Denial of Service (DDoS) attack. Valve was forced to suspend the matches for several hours while they sorted out the mess. DOTA 2 requires an internet connection to work, making it susceptible to attacks like these. The matches have been marred for the past few days with several connection issues, leading many commentators to wonder why Valve doesn’t use a Local Area Network to host the games.

The malicious attack on the DOTA 2 tournament, as well as the various connection issues, may pose a large problem for the games as they have the potential to corrupt some of the results. The issues are causing lags that will disadvantage some teams. Valve and its sponsors have put up $18 million in prize money for the tournament, so these issues are causing no end of troubles.Not only could it lead to the wrong team winning, but the connection issues are also making it difficult for viewers at home to follow the live streams. The sponsors, which paid all that cash to get their ads shown, essentially aren’t getting their money’s worth.

The fans who are watching at home also contributed a substantial sum to the prize money. Part of the funds came from fans buying an in-game item called the Compendium. A quarter of the revenue from that item went into the pool of prize money, but now the fans who paid are getting a substandard stream.

All of these issues could be solved if DOTA 2 had a LAN mode. That would mean players can connect over their own local network instead of having to go through the online servers, which opens their connections up to tampering from hackers. It’s led many commentators to wonder why Valve hasn’t figured out a way to protect their public tournaments from these sorts of issues. Surely it wouldn’t be too difficult for them to add a LAN mode to the game.