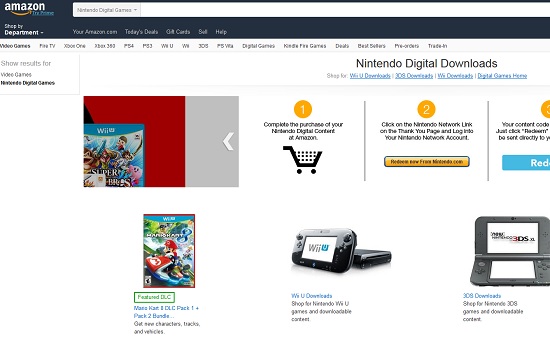 Digital Nintendo games are now being sold on Amazon. The new service links up customers’ Nintendo ID numbers with their Amazon accounts and allows them to purchase digital copies of a select few Nintendo titles. The titles are being sold just in time for the release of Super Mario Maker for the Wii U.

Some of the Nintendo games on offer from Amazon include:

Also on offer are a selection of classic titles that have been ported to the Wii U and 3DS:

For the full set of available titles, see the listing on Amazon.

Nintendo has always maintained very tight control over its content and how it is distributed, which explains why it’s taken so long for them to sell digital copies of their games over Amazon (and why the selection is so limited). Games for pretty much every other platform can already be purchased digitally from Amazon, so many will see this as yet another example of Nintendo lagging behind the rest of the gaming world.

It’s worth noting that Nintendo and Amazon have had a pretty rocky relationship over the past few years. For instance, back in 2012, Amazon halted all its first party sales of Nintendo products, though resellers were allowed to continue selling them. The first signs of the relationship improving came earlier this year, when Amazon resumed first party sales of the 3DS (they still aren’t selling the Wii U).

While Amazon sales aren’t likely to be a big boost for Japanese gaming giant, with physical stores like Gamestop making up the majority of Nintendo’s sales, it’s certainly a step in the right direction.