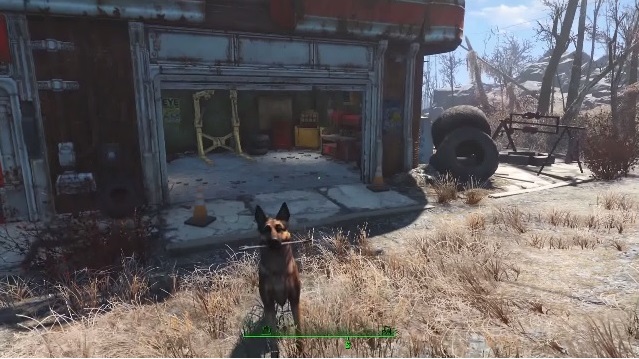 The post-apocalyptic wastelands of Boston are a very unwelcoming place, but luckily in Fallout 4 you won’t have to roam them all by yourself. Bethesda is bringing back a number of beloved companions and throwing some new ones in the mix as well. As you may have already seen in the debut trailer, one of your companions will be a German Shepard, but this is no ordinary dog mind you. Bethesda confirmed that Dogmeat is making a comeback in Fallout 4 and that the German Shepard we’ve seen in the trailer is, in fact, him.

If you’ve played any of the previous games then I’m sure you’re already familiar with the canine companion. If you haven’t played any previous Fallout games, first off shame on you, and secondly, just know that Dogmeat has been around ever since the original 1997 title and is seen by many as the most popular companion in the series. That said, the Dogmeat we saw in Fallout 3 was actually not the same as the one from the first two titles. Likewise, Fallout 4 is introducing a brand incarnation of Dogmeat and this time around, the people over at Bethesda decided to make him immortal.

In addition to Dogmeat, gamers will also be able to choose among a number of other companions that include both human and non-human NPCs. We don’t have a complete list of companions just yet, but Bethesda did mention that Mister Handy, Piper and Preston Garvey will be three of them. The company also revealed that Fallout 4 is all about love and that players can pursue romantic relationships with any human companions regardless of gender. So, same-sex relationships for Fallout 4 confirmed? Sure seems like it.

As for Dogmeat, you won’t be able to romance (I think) the animal, but if you want to learn more about this timeless companion you can check out the new Fallout 4 behind the scenes video below. Whereas in Fallout 3 Dogmeat was inspired by Max Rockatansky’s Blue Heeler from Mad Max 2, for the sequel Bethesda looked at Lead Level Designer Joel Burgess’ German Shepherd, River, as a source of inspiration.

Fallout 4 comes out on November 10th for the PS4, Xbox One, and PC. If you still haven’t bought the game, check out this article and find out how to pre-order both the base game and the Season Pass for less than it will cost at launch.