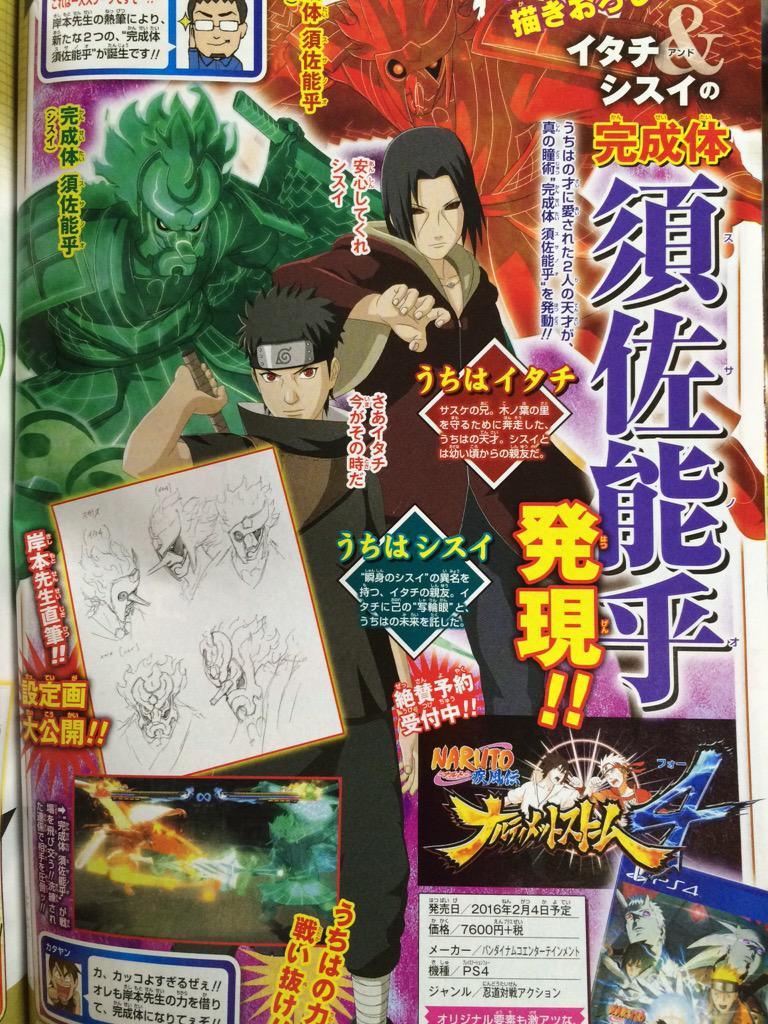 Naruto Shippuden Ultimate Ninja Storm 4, the latest entry of the series developed by CyberConnect 2 launching next year on consoles and PC, is going to feature the biggest roster of the entire series. Alongside all the characters revealed until now will be new forms for two characters that has been created just for the game by series creator Masashi Kishimoto, as confirmed earlier today.

The latest issue of Shonen Jump magazine has confirmed that Shisui Uchiha and Itachi Uchiha will come with a Perfect Susanoo form. As mentioned above, the new forms of the two characters has been created just for Naruto Shippuden Ultimate Ninja Storm 4, having never appeared in the manga. You can check out how they will look in the upcoming game by checking out a scan from this week’s issue of Shonen Jump right below.

The full Naruto Shippuden Ultimate Ninja Storm 4 character roster has yet to be revealed in full so we still don’t know all the characters that will be included in the upcoming game. Among these yet to be revealed characters could be Naruto and Sasuke from Boruto – Naruto the movie. A fan has asked the Naruto Video Games official Twitter profile about their inclusion and their presence in the game has been neither confirmed nor denied. This most likely means that the team is still considering their inclusion in the game.

Last week some new Naruto Shippuden Ultimate Ninja Storm 4 screenshots have surfaced online, showcasing Obito and Kakashi as they fight Madara in a really intense battle. These screenshots are the high-quality versions of the same screens that have been shown by the latest issue of the Japanese magazine V-Jump.