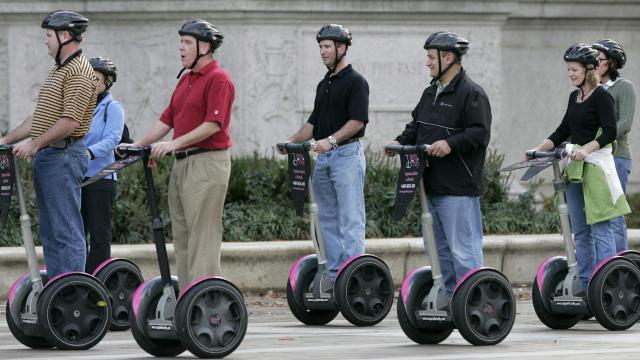 As we approach the end of 2015, it is with hindsight and sharpened critical claws that we look back at the most controversial and ultimately disappointing innovations that have been a feature of the year. Rewind your minds back to April the 24th, when the CEO of Apple, Tim Cook, stepped out of the tech giant’s Californian headquarters and announced that the divisive and potentially disruptive Apple Watch was now on sale. That moment saw plenty of debate over whether it was revolutionary or just gimmicky but, as usual for Apple, it proved to be a success. Here however, we look at inventions that, at least in our view, are more miss than hit.

Given that when Segways were invented at the tail end of the 20th century it was predicted that we would all be buzzing about on them come the end of the following decade, we can only consider them a failure. Today the Segway’s most useful function seems to be that of a punchline to a passé joke. Envisioned as a way for people to get home after work in urban areas, it was then banned on the streets and then on the pavement in most places, causing its quick demise. Segway? No way. And, oh, what’s that ridiculously buzzing around the corner? Maybe the hoverboard will be more of a success?

Despite oil always having been a much sought after commodity, some supermarkets in the late ‘70s decided it would be a grand idea to utilize a new way of transporting groceries from till to cupboard – the plastic bag. 40 years on, and an ocean full of traumatized dolphins later, we are now in the process of encouraging retailers to opt for paper bags … sigh

Thrust upon the world like a knitted Christmas jumper from your aunt Donna, auto-tune was not requested nor desired by any music-loving human being with a set of functional ear drums. But we got it all the same. It aided the flourishing of appearance-oriented ‘artists’ and made it okay for musicians not to have any musical ability. The auto-tune gave birth to a tidal wave of dubious music.

These were our top three, but there’s plenty more where that came from. A few honorable mentions from the past 100 years are: subprime mortgages, spam email, CFCs and Mr. International, Pitbull.

Weirdest, most unconventional smartphones worth saving for
The Story Behind Sometimes Always Monsters – PAX Aus 2015