The Decline and Revival of Japanese Video Games in the West 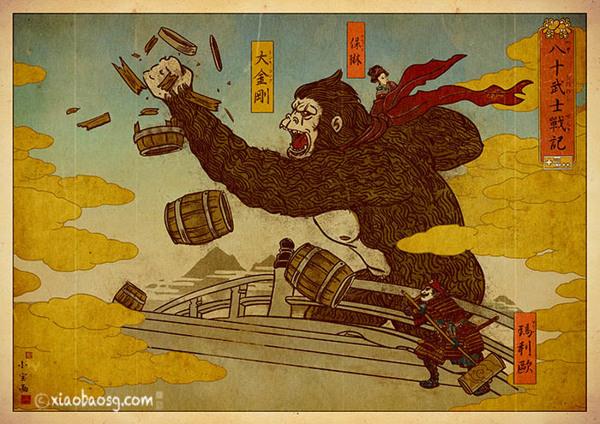 The Decline and Revival of Japanese Video Games in the West

Over the last handful of years, some of the biggest and most original highlights in the video gaming world have been Japanese. Huge hits like FFXV, Nier Automata, Persona V, Gravity Rush 2, The Last Guardian, Zelda Breath of the Wild, BloodBorne and the Dark Souls series, which are all uniquely and unequivocally Japanese, have enjoyed great success both critically and financially .Previous to this, our PCs and consoles were starting to suffer from a Groundhog Day levels of repetitive open-world GTA clones, Gears of War-esque third person shooters, countless FPS and an untold number of sequels, prequels, and even pre-sequels. I think everyone would agree that, although Japanese games have always been present, this strong resurgence is a much welcome breath of fresh air.

Looking through a list of the best selling video games from the seventh generation of consoles, if you remove Nintendo, many would notice a distinct lack of Japanese games. This void in the games industry seemed to span throughout the ten-year lifecycle of the PS3, Xbox 360 and the then current generation of PCs. This sudden lack seemed odd, after all, the 5th and 6th generations (not including the Xbox), contained a healthy mix of both Japanese and Western developed games. So why did the West lose interest in Japanese games? Furthermore, why did  Japanese developers struggle to make games that would sell well in the West?

As pointed out back in 2014, by a former game dev and journalist James Mielke, one of the reasons why Nippon games struggled so much, was due to the appearance and ensuing success of the Xbox.  Microsoft, who already had an entire wealth of PC technology on their side, were able to integrate it into their console. Although Sony’s PSone and PS2 already had much support from Western developers, their technology was more arcade based. This meant that many new Western development teams chose to cast their lot with the Xbox, being already more familiar and comfortable with developing games on PC technology.

With the Xbox, gamers started discovering different kinds of video games. Popularity for games by Bethesda, for example, who dazzled players with their huge, realistic and immersive worlds, really caught on. Microsoft themselves started publishing their own games such as the action packed third person shooter game Gears of War. The Xbox also became the number one choice for players of Activision’s  first-person shooter series, Call of Duty. Due to the popularity and sudden demand for these types of games, Sony couldn’t help but provide PlayStation owners with these same Western developed games. Call of Duty and the smash hit series Halo, in particular, offered a more gritty, realistic experience. It stood in stark contrast with the more fantasy-esque take many Japanese games offered. To quote Mark McDonald, executive director at a Tokyo localization company, in an article from 2014: ‘ First-person shooters rely on realism, but a lot of Japanese game design comes from an imaginative aesthetic where it’s not just going for straight realism. But that [realism] was kind of what people started to want.’ The gaming landscape had suddenly shifted and it only continued to do so as the next generation of consoles came along.

Japanese developers seemed at a loss, preferring to concentrate on releasing Japanese games for handheld consoles, many of which were aimed purely at the Japanese consumer market. Meanwhile, in the West, even popular, well established, Japanese franchises were struggling to find their footing. Resident Evil 5 and 6 disappointed players. Final Fantasy XIII and it’s ensuing sequels didn’t quite manage to captivate people as much as the previous games in the franchise had. It probably didn’t help that Team Ico, the Japanese team behind some of the most critically acclaimed games of the past decade, never actually managed to release their much anticipated game, The Last Guardian, on the PS3.

Of course, that’s not to say that Japanese video games had completely fallen off the radar. Many in the West still enjoyed them, they were just getting harder to find and didn’t often make an appearance on the AAA charts list, preferring to be more commonly found on Nintendo Ds, 3Ds, Sony’s PSP and PSP Vita. Interestingly so, the most successful Japanese titles released on the 7th generation often contained more of a Westernised theme. Games such as From Software’s hugely popular Demon Souls and Dark Souls, managed to captivate players, with it’s brutal, medieval world of knights and dragons. The same could be said for Dragon’s Dogma, which was like Capcom’s answer to The Elder Scrolls series. It impressed players with its gritty, fantasy world and its thrilling fights against titan-esque monsters from Western folklore. It could be believed that the success of these games helped certain Japanese developers get a clear idea of what Western gamers liked, adapting their games to follow suit but with their own unique twist.

Now Japanese games are back and they’re stronger than ever. Could this be a direct result of an overabundance of realistic and gritty games, perhaps? While, simultaneously, leading consumers back to the surreal and unique worlds offered by Japanese titles. Overall, it’s great to see Japanese titles doing so well again. Whether it be on PC, PS4, Xbox One or Switch, Japanese games will no doubt still manage to intrigue and entice Western gamers for many years to come.