A Review of World Enough and Time 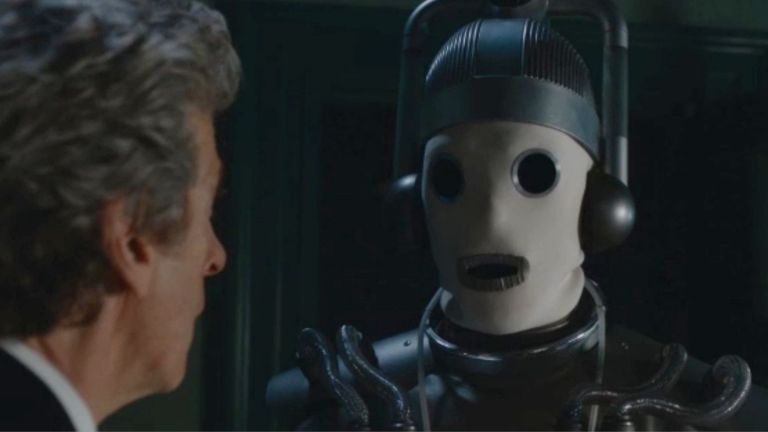 A Review of World Enough and Time

The latest Doctor Who episode, “World Enough and Time,” aired this past weekend. Unlike the previous episodes, which either had political themes or were nothing more than one great big political message, “World Enough and Time” is just some good old sci-fi fun, or at least that’s what it tries be. The actors give it their all and bring the story to life, but some aren’t given enough material to properly shine.

Spoiler alert, this review covers everything. Every plot twist, every event (mostly) — everything. If you haven’t seen the episode, stop reading this article, watch the show, and then come back.

This current season’s overarching plot focuses on The Doctor’s attempted rehabilitation of his long-time arch-nemesis, The Master, or Missy (as she currently calls herself). “World Enough and Time” starts with Missy and The Doctor’s companions, Bill Potts (who is actually a woman) and Nardole, answering a distress call from a 400-mile long colony ship struggling to escape a black hole’s gravitational pull, while The Doctor watches and judges Missy’s first outing as a good guy/gal from the safety of his TARDIS. However, the group’s arrival, or more specifically Bill’s arrival, attracts the attention of a bunch of Silent Hill monster rejects who carry IV drip poles and wear bags over their heads; I’m going to refer to these creatures as the Incomplete, because God knows they weren’t given a name in the show. Since the sole remaining crew member of the ship, Jorj, is terrified at the thought of seeing the Incomplete, he decides to kill Bill (sorry) with a laser gun, because Jorj thinks the Incomplete will leave if Bill dies. And this is no weak laser gun; it completely obliterates Bill’s chest and leaves a hole big enough to stick your head through. While the Incomplete leave, they take Bill to a hospital, so a surgeon can fix the gaping hole in her chest. What seems like a straightforward plot that focuses on a black hole quickly turns into a race against time to rescue Bill from the hospital. However, he Doctor has to hurry to save Bill because of the black hole. For those of you who don’t know, black holes create a huge time dilation effect, thanks to their impossibly strong gravity. To put it simply, the closer you are to a source of gravity, the slower you and time moves to outside observers and vice versa, which means that every minute for The Doctor, Nardole, and Missy is years for Bill. As for Bill, turns out she has a new, mechanical heart that only functions inside a the hospital, which explains why she just can’t go to The Doctor; I theorize that it only functions when connected to the hospital’s Wi-Fi, but your guess is a good as mine. However, The Doctor, Missy, and Nardole are too late to stop Bill from being converted into a Cyberman, but not any regular Cyberman: a Mondasian Cyberman. Dun dun dunnnn! Oh, and apparently the person Bill befriended through her years waiting, Mr. Razor, is actually The Master before he regenerated into Missy. Um, surprise?

As previously mentioned, “World Enough and Time” doesn’t have a political message; it’s just The Doctor and Company gallivanting across time and space in search of adventure and getting in over their heads, i.e., what the series is best at. The aforementioned black hole organically does away with the need for a ticking clock while still retaining a sense of urgency, since Bill isn’t in any danger (as far as The Doctor knows) but will die of old age in a matter of hours thanks to time dilation. Bill, on the other hand, has nothing but time while she waits for The Doctor to rescue her. The episode manages to switch between The Doctor hurrying and Bill lazily going about her new life rather seamlessly. However, the plot twists only work for people well-versed in Doctor Who lore. The reveal that the ship is Mondasian (made by humans who hail from Earth’s twin Mondas) in origin, the unveiling of the Cyberman, and the literal unmasking of the Master are only impactful for people who know what Mondas, Cybermen, and The Master are; everyone else will just be confused. Then again, the teasers spoiled these plot twists early, so audiences had plenty time to do the proper research.

A story will only get you so far in a television show; you also need characters who are fun, memorable, relatable, well-written, and brought to life by their actors. Doctor Who has characters in spades, but the show only focuses on a select few, usually The Doctor, his companion(s), and the villain/monster of the week. Usually, these characters get the best lines and effectively move the plot along, but sometimes one or two are squandered, which happens in “World Enough and Time.” Lucky for the audience, though, all the actors delivered solid performances.

The Doctor
This incarnation of The Doctor wears his feelings on his sleeves, especially the negative ones. However, he is quick to believe that he can trust other people, hence his willingness to give Missy a chance and let the Incomplete cart Bill away. The Doctor isn’t the main focus of the episode, but he still manages to shine in several moments, all brought to life by Peter Capaldi’s nuanced acting. Also, I love that he managed to dumb down time dilation for the audience and audience surrogate; it’s the kind of stuff you need in shows like Doctor Who, and Capaldi does it rather well.

Bill
I would complain about Bill remaining in the hospital for years, as normally she hates just sitting on her butt, but she knows her mechanical heart only works in the hospital, so what else can she do? At least she takes up odd jobs and learns about the ship from Mr. Razor, so she is as active as she can be in her situation. Pearl Mackie helps sell Bill as both accustomed to her new life and as eager to leave it once The Doctor arrives.

Missy
I’m still not sold on the whole “Missy’s trying to be rehabilitated” story, but at least she’s got an instantly recognizable personality down: one part Hannibal Lector and two parts Harley Quinn. Maybe Missy’s got a plan up her sleeves, or maybe she finally realizes that it’s pointless to try to kill The Doctor. I am torn on this, but she is consistent with her psychopath-yet-upbeat personality. Even when Missy tries playing the good guy/gal she will always be The Doctor’s equal and opposite. Michelle Gomez continues to steal the show and makes me believe that Missy would gladly disintegrate me if I so much as spilled tea, which is something Missy has probably done in the past on more than one occasion.

Nardole
Nardole is, as Missy puts it, the comic relief. Usually he helps move the plot along or lightens the mood with a funny line, but in this episode he is nothing but superfluous. Nardole is slowly becoming the Jar Jar Binks of the series, and “World Enough and Time” just might be the nail in that coffin. Matt Lucas, I’m sorry, you were fun when you played a one-off character, but now your shtick is so tired it’s literally putting me to sleep. It’s not your fault, though; blame the writers, because they just don’t know what to do with you. You’re a funny guy, but you need better roles.

Mr. Razor/The Master
Mr. Razor initially comes off as one of those “eccentric for the sake of eccentricity” characters who occasionally appear in Doctor Who, and while he seems friendly, I always predicted he would eventually betray Bill; I prayed that he wouldn’t, but my instincts won out in the end. However, I need to ask: why did Mr. Razor have to be The Master in disguise? Couldn’t he have just been an intelligent charlatan who loved playing the fool to trick people? Maybe the next episode will answer this crucial question. Still, hats off to John Simm for effectively playing this strangely-charismatic, goblinesque man. I never would have guessed who he was under all that makeup, but that’s the point of such a disguise. It’s The Master’s M.O. to a tee.

I enjoyed “World Enough and Time”, at least while watching it. The episode took its time (pun not intended) with the plot and never felt rushed. However, I realize that I know more about Doctor Who lore than the average Doctor Who viewer, which unfairly colored my experience of certain events, including the Mondasian plot twist. The black hole makes for a decent red herring, but it isn’t as integral to the plot as it could, or even should have been, and I only like the Incomplete because they are easy to riff on. The Mondasian Cyberman plot twist probably would have worked without these not-Bubblehead Nurses, but then again, the twist only works if you know what Mondas is, and I’m willing to bet money that more than a few current Doctor Who fans don’t. The more I think about “World Enough and Time,” the more I realize I liked it when I watched it because I was jaded by the previous three episodes. That’s not to say “World Enough and Time” is a bad episode; the story is adequate and the actors all deliver admirable performances, even when they’re just taking up space on screen. The biggest problem with the episode is that much of what it builds to relies on nostalgia and an encyclopedic knowledge of Doctor Who aliens.

Andrew DoughtyDecember 5, 2018
Read More
The Decline and Revival of Japanese Video Games in the West
Spider-Man and the MCU: What’s the Deal with Continuity?