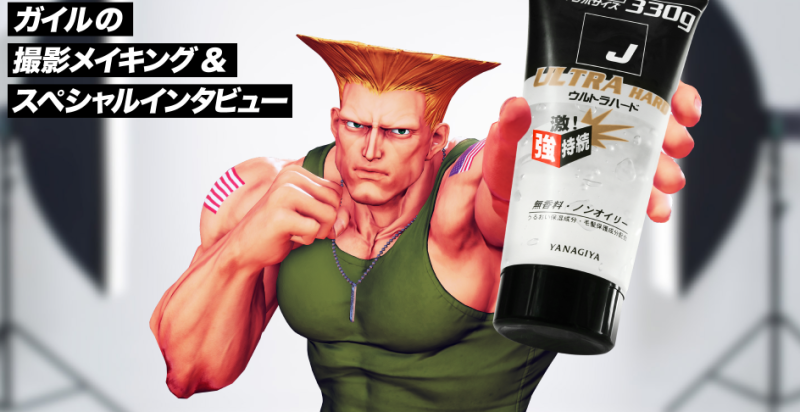 Yeah yeah, this is going to become old really fast. But what can I say? Seeing video game chracters in commercials that are pretty good is kind of interesting. Video games have started to integrate to diverse aspects of various cultures. This is a very cute thing when it happens in my opinion. Because that means other companies are made aware that games are popular and. Of course, they can be profitable and coexist. And Guile from Street Fighter V joins in on the fun!

Guile and his Gravity Defying hair use a very strong Japanese Gel.

Which leads to Japanese company Yanagiya, which has been linked to the cosmetic industry since 1615. Recently, they have taken the decision of having a flag character that fits their line. And what better pick than the Street Fighter American personification of hair gel Guile? Yes, the US badass that has impacted everyone’s hearts with his Sonic Boom now promotes J-gel.

In fact, his presence as a Yanagiya mascot is so prominent that the official site has a humorous interview with Guile in which he says nuggets like this: “Disheveled hair is connected to losing one’s composure. It’s not cool.”

I’m kind of bummed that there isn’t a direct Japanese translation of the interview. I’m leaving the link here for those interested who know Japanese. But even still, it’s kinda nice and hilarious to see a character like Guile being a flagship for a Gel product.

I mean. The dude is very strong, and would make a nice model for the product himself without really trying. He also is the definition of Hair products galore, with his hair that defies gravity when he does his attacks. Would anyone be surprised if Guile said that he used a very strong variation of J-Gel for himself? That’s what I thought.

The gaming industry sure has some odd ways of entertaining people. Seeing Lightning and Snow promoting a Nissan car was a surreal experience, but not a very odd one. However, I want to start seeing American commercials having video game characters in them. Don’t disappoint me, Corporate America!