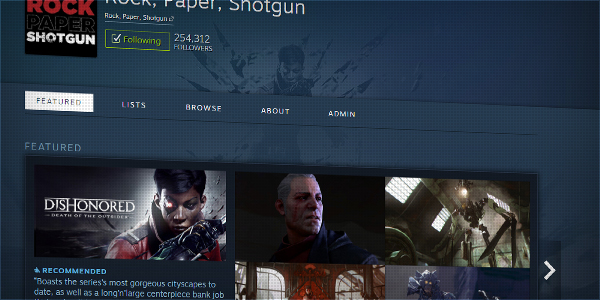 One of the big features in Steam is the Curator system. This feature allows the 33 Million Steam users to check suggestions made by popular outlets and people. However, while the system works on paper, it has a few problems that could be addressed. Even Valve thinks that there are new features that can be implemented as well.

Coming this Fall season, there will be a new update to the Curator system. “we’re focusing on how to support the streamers, journalists, critics, content creators, writers, enthusiasts, and friends that you already know and trust to be able to help you find your next favorite game.” Reads Steam’s latest blog post detailing the upcoming changes to the Steam Curator System.

“The feedback is clear that the system needs to do a bunch of things better in order to work well for the three primary sets of people it’s trying to serve: players, curators, and game developers.” They also mention that they have heard all kinds of players throughout this journey. From players, curators, streamers and even game developers. All with the intention of bringing a better system for players and reviewers.

Thanks to the latest updates, Steam Curators will have better tools to talk about the games they review. For example, there will be a feature that allows video embedding for Steam Curator reviews. Not only that, but users will also be provided with easy access to the previous reviews done by the Steam Curators.

Moreover, the players will actually play an important role in the Curator system. As Curators will often receive updates about how much players have been influenced in the purchase of a game review.

That’s not all, as Valve will also implement new ways of communication between Curators and developers. With Curator Connect, developers can search for appropriate Curators, and then send a copy of their game directly through Steam. Developers will have access to a list of all curators with their linked social media accounts and followers to verify humanity. The developer can then build a list of the Curators they wish to send their game to, include a message describing their game, and hit ‘send’.

With this, Valve aims to improve the Curator system so that developers and Curators have a better relationship. This could be a great development for upcoming journalists, streamers and even aspiring writers.

We Almost Got a Resident Evil TV Show, and Here’s the Proof of Concept
Microsoft has a Lot of Faith in its Gaming Division