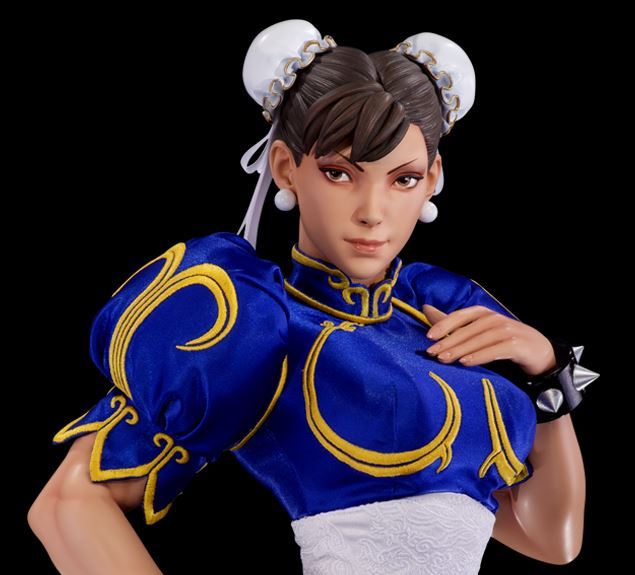 A while ago, a beautiful (and expensive) Chun-Li statue made the rounds on the Internet, thanks in no small part to Kotaku. The statue draws from Chun-Li’s most recent design where she looks like a reasonably-muscled female athlete and comes in three different versoins: her Street Fighter II costume, her Street Fighter Alpha costume, and her Street Fighter V “battle dress.” While wandering the New York Comic Con show floor, I found a booth run by the statue’s creators, Pop Culture Shock Collectibles, and was allowed to take several pictures of the statues on display. After all, the creators at PCS Collectibles don’t just make giant, expensive statues of everyone’s favorite Street Fighter femme-fatale; they also make giant, expensive statues of many other characters as well. Here’s what the PCS Collectibles had on display:

And I thought Goro was savage. This statue is bloody and I love it. Really makes you not want to cross Kintaro’s path. Ever.

This guy’s come a long way from being a doofy idiot in the Mortal Kombat cartoon (yes, that is where he was introduced). Consider my interest in this character piqued thanks to this statue.

I just…wow. This might be the most epic Power Rangers product in history. It’s as big as a Megazrd, I have nowhere to put it in my house, and I want it. Badly. You might wonder why this statue as a price range on it, and that’s because the Green Ranger statue comes in three versions. The first version, $499, is just the ranger posing with the Dragon Dagger on his Power Coin. This second version, a $524.99 EX edition of that statue, comes with an additional right arm that holds the Sword of Darkness, two extra arms that let him play the Dragon Dagger like a Dragonzord-summoning flute, and swappable Dragon Dagger sheaths and Dragon Armor. But, the version in the picture is the ultra-expensive $999.99 version where he rides the Dragonzord’s tail like a surfboard. It comes with all the swappable arms, sheaths, and armor of the EX version and is arguably the most impressive statue PCS Collectibles ever made.

And you thought the Chun-Li statue was amazing. Take a look at this guy. Words don’t begin to describe how awesome Sagat looks in statue form, but the fun doesn’t stop there. Those little statues on the side are extra $124.99 accessories that dial Sagat’s intimidation factor up to 11, but that’s still not the end of it. PCS Collectibles also has a $1149.99 EX version (not pictured) that comes with swappable arms that fold over his chest and an additional scowling head.

Yet another statue with multiple price points, the Akuma statue takes the awesomeness and intimidation factor of Sagat and multiplies it by a factor of 10. The base $475 version just comes with a scowling Akuma in his iconic pose and light-up LED FX functionality, but the $699 Deluxe EX version comes with a crazy-looking swappable head (the one that looks like he has a lion’s mane), a swappable bare torso, swappable belts, swappable hands, and swappable prayer beads. But, the most expensive version, priced at $999.99, lives up to its name of Ultimate EX Edition. It comes with even more swappable heads, additional swappable torsos, more swappable hands and feet, and a brand new flaming base. Oh, and the heads, torso, and new base have light-up LED FX functionality. I know I said the $999 Green Ranger statue is the most impressive one I’ve seen, but the $999 Akuma statue is a very close second.

Again, another character I know nothing about, but this statue makes me want to learn more about her.

This yoga master might have grown an old-man’s beard, but he’s just as flexible and fiery as always. This statue helps me appreciate just how much this guy can stretch.

Ia mother freak’n Cthulhu ftaghn, son! Ye olde squid-face rises from the depths to show that he’s a force beyond nature. Reality quakes before his presence, and few statues capture his fearful magnificence quite like this one.

These are only a few  of the statues available at PCS Collectibles. Others available at the store include Blanka, Robocop, Batman, and many more, some of which are EX and/or alernate color versions of statues I mentioned in this article. Plus, I got an exclusive scoop that the company will soon announce a new figure. Here’s a hint: it’s a male Mortal Kombat character in 1:4 scale. Fingers crossed for Kung Lao and his deadly hat.