Dead Rising is one of Capcom’s most popular video game franchises since its release in 2006. With the most recent entry in the series being released in 2013 as an Xbox One launch title, players were given a plethora of Combo weapons increasing the number of options since the first initial concept was introduced in Dead Rising 2 in 2010. The creation of combo weapons offers players new and innovative ways of destroying the massive hordes of the undead. Here are the top 10 Dead Rising Combo weapons.

The Boomstick is a combo weapon  that can be created by combining a shotgun and a pitchfork. The Boomstick gives the most PP out of all Combo Weapons in Dead Rising 2. Its heavy attack gives 2500 PP, making it great for getting lots of PP in a short time. Fun Fact: the Boomstick is likely a reference to the 1992 movie “Army of Darkness.”

The Laser Sword is available as a combo weapon in both Dead Rising 2 and 3 by combining gems, and a flashlight. The Laser Sword allows players to slash zombies in half and act like modern-day Jedi Knights in the process. The Laser Sword is also one of the most powerful weapons in both games and is a valuable weapon to keep in your inventory if you’re about to fight a psychopath.

The Super Slicer can be obtained by combining a Servbot Helmet with a Lawnmower. Slicing down the zombies plaguing Fortune City with the propeller blades on the top of the super slicer, while Dead Rising 2’s protagonist Chuck Greene can also charge head first into the swarm of zombies is what the Super Slicer is best for.

The Hail Mary can be created by combining a Football with a Grenade. The Hail Mary can be used to clear out massive groups of zombies. Whether you’re playing Dead Rising 2 and hauling some ass back to give Katey her next dose of Zombrex or playing Nightmare Mode in Dead Rising 3 and running around trying to get to point A and B within a limited time as Nick Ramos. 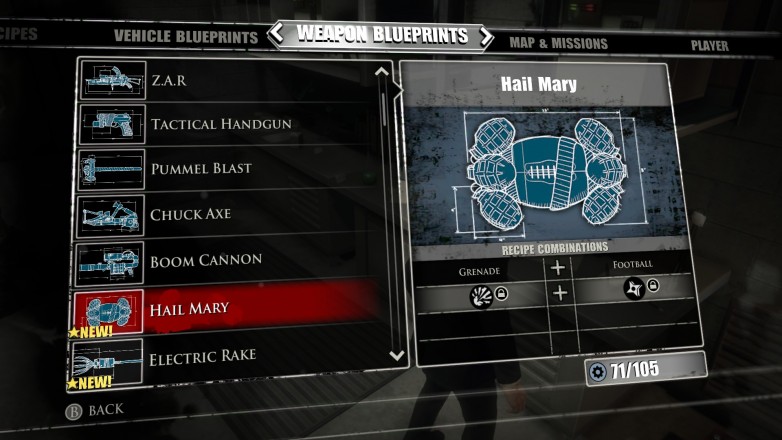 The Ultimate Grim Reaper can be created by combining a Fire Reaper with a Reaper Mask or a Death Mask Reaper with a Gasoline Canister. The Ultimate Grim Reaper is the best weapon to use in Dead Rising 3 in terms of gaining PP and leveling up in a short period of time. It boasts the same old usual melee attacks borrowed from the past weaker reapers (Fire or Death Reaper) and combines then with a devastating heavy attack that showers the general vicinity in grenades which can only be replenished through getting kills with the weapon.

While the Flamethrower available in both Dead Rising 2 and 3, Dead Rising 3’s Flamethrower combination and design are much more fun to use than its predecessor. Introduced in Dead Rising 3 as Rhonda’s new arm after having hers cut off by the military, players can create this weapon by combining cooking oil and a leafblower, which is capable of taking our a substantial amount of zombies.

While one of the strongest weapons available in Dead Rising 2, the Paddle Saw’s speed is slow. Seeing as the combination  the weapon requires involves the Kayak Paddle and A Chainsaw, it’s understandable why the speed is lacking. Unfortunately, this weapon will not fit in your inventory. Players will want to use it right away as they can’t keep it on them since it constitutes a heavy weapon.

The Sledge Saw is the first combo weapon available to players in Dead Rising 3 and made its debut in the Dead Rising 3 trailer. One end of the Sledge Saw is the sledgehammer, while the other is the cement saw. This melee combo weapon can be used to destroy zombies in the most goriest ways thought possible in the game and it was even popular enough to be used by the main protagonist in the movie, “Dead Rising Watchtower.”