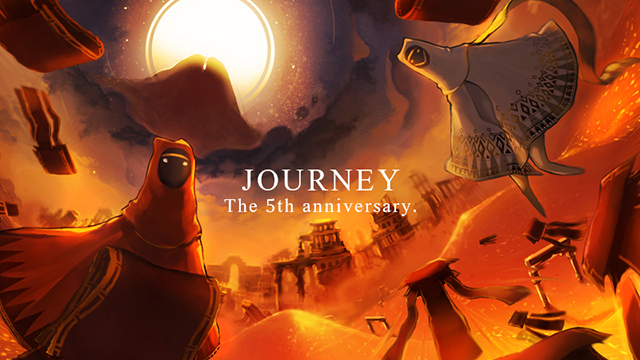 Journey turns five years old today and Santa Monica Studio and the PlayStation Blog want to celebrate with charity auctions, new merchandise, sales, and all the lovey dovey feels. That last part makes a lot more sense than you’d think. Journey is one of the few titles (alongside thatgamecompany’s other title, Flower) that can take you on a wondrous adventure with little to no context.

In celebration of that a few things are happening. The Able Gamers Foundation will host a charity auction that includes a very rare edition of The Art of Journey book signed by the creators, an original Journey “Traveler” statue, and a 20th Anniversary PS4 special edition console. Click here to be taken to the charity’s auction bids.

Additionally, a five year anniversary Journey t-shirt will be available on the PlayStation Gear Store, which is running a 20% off all Journey merchandise until March 19th. Sounds like a convenient deal to me.

“It’s hard to put into words what the past five years has meant to the team since we released Journey. To see all of the connected travelers extend their friendships online, at conventions, and in the community has been truly humbling. Thank you for continuing to share Journey and for inspiring us for our next game.”
–Jenova Chen

If for whatever reason you failed to pick up Journey in its hayday, it’s currently available for the PS3 and PS4 wherever video games are sold. Also, be sure to hit the auction page as the special edition PS4 is currently sitting at $150. Not bad for a brand new console. The artwork signed by the creators themselves is a little pricier I’m afraid. Let us know if you end up placing a bid! We’d love to know who won the collectibles.

Zach RileyJanuary 31, 2023
Read More
Mass Effect: Andromeda Will Have a Hub for You to Share Your Ryder
Splatoon 2 Demo Nintendo Switch Preload Now