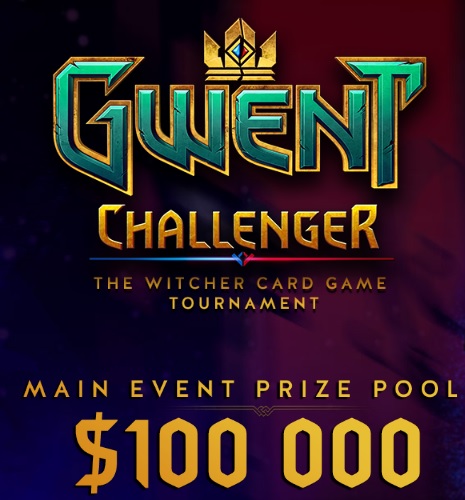 If you’re in the PC GWENT beta, you have a chance to win $100,000. Witcher 3 developer, CD Projekt Red, has teamed up with ESL in order to bring an official GWENT: The Witcher Card Game tournament. First place will receive $60,000, second place gets $20,000, and third/fourth place will get the remaining amount ($10,000 each in case you’re bad at math).

The tournament structure will be division and tiered base starting on April 8th. Those who win their subsequent matches will move on into the finals. Then the top four community players will face off against “professional” gamers: Trump (Jeffrey Shih), Lifecoach (Adrian Koy), Noxious (Kacem Khilaji) and ppd (Peter Dager).

Make sure you register and read the rules before competing. You can do so here and have between March 16th-March 22nd to do so. Keep in mind it is PC only so even though the GWENT beta is on the Xbox One, console gamers won’t be able to compete.

“It’s a real privilege to observe how active GWENT players are in the realm of competitive gaming. Community-powered tournaments like The Passiflora Championship, The Seven Cats Brawl or The Gwentlemen’s Open are a source of inspiration for the entire team, and we definitely want this part of GWENT to grow,” said Paweł Burza, Community Manager, CD PROJEKT RED.

“GWENT: The Witcher Card Game was created because The Witcher community wanted it. Now we’re seeing more and more gamers wanting to play GWENT competitively, so here we are with a chance to play against some heavy-hitters, and a prize pool to spice things up,” said Marcin Iwiński, Co-founder, CD PROJEKT RED. “I can’t wait to see who wins!”

If you decide to enter, let us know in the comments below. It would be nice to know a master Gwent player. For those that don’t know, GWENT is a popular mini-game from The Witcher 3 that may or may not have been more fun than the actual RPG title.