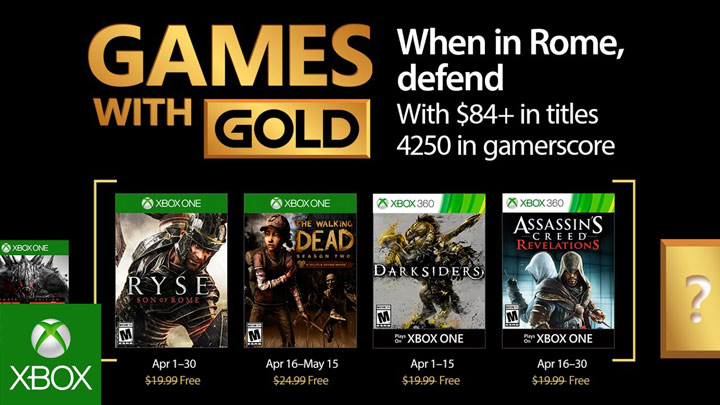 Microsoft has officially revealed their slate for the April Games with Gold program. Starting April 1st, Xbox Live Gold members can download Ryse: Son of Rome for Xbox One and Darksiders for Xbox 360. Following those on April 15th, members will also be able to get their hands on Telltale’s The Walking Dead Season Two for the One and Assassin’s Creed Revelation on the 360.

Ryse: Son of Rome has players take on the role of a Roman soldier out for revenge in a gorgeous hack and slash adventure. The Walking Dead Season Two sees a more grown up Clementine from the first season trying to survive in the zombie apocalypse and has the player not only navigate this new world, but some tough and emotional decisions that shape the game as you play.

In Darksiders, the Horsemen War must clear his name as the bringer of humanity’s end in this cross between Legend of Zelda and God of War. Assassin’s Creed Revelation brings the tale of master assassins Ezio Auditore da Firenze as he fights against the Templar Order in the city of Constantinople and discovers the ultimate fate of famed assassin Altair Ibn-La’Ahad.

It is important to note that both Xbox 360 titles are playable through Xbox’s Backwards Compatibility program meaning that gamers can play all four titles on their Xbox One. Also of note, both Darksiders and Assassin’s Creed Revelation have remastered versions on the Xbox One.

It appears to be a solid list for members of the program this coming month. Let us know down in the comments which of these games you plan on picking up for yourself.