Move Over Crash Bandicoot; Jak and Daxter Remaster Coming to PS4 This Year 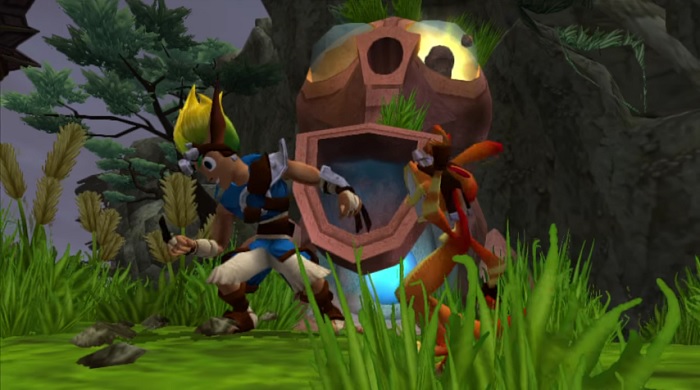 Move Over Crash Bandicoot; Jak and Daxter Remaster Coming to PS4 This Year

It’s only natural that gamers want their favorite old school games on the latest systems with all the remasters and remakes announced or released. In fact, a lot wanted a Jak and Daxter remaster on the PS4 to join Crash Bandicoot. Both were created by Naughty Dog and the possibility seemed incredibly likely and doable. Turns out everyone who thought so is right. PlayStation announced that a Jak and Daxter remaster will make its way to PlayStation 4s everywhere with one video.

PlayStation’s Youtube channel uploaded a very short video detailing the revelation. Although all we get in actual footage is our lovable duo unleashing some sick dance moves. The real kicker comes at the end because four titles will be apart of this Jak and Daxter remaster. Jak and Daxter: The Precursor Legacy, Jak II, Jak 3, and Jak X: Combat Racing. They just had to include the latter due to everyone liking car combat games back in the early 2000s. You can view the announcement trailer for yourself below.

All four classics will feature 1080p up-rendering, trophy support, enhanced Shareplay, remote play, and second screen support for the PS Vita or PlayStation App. The Jak and Daxter remaster will be digital only at the time of this writing. No word was given on a specific release date, but we’re fully expecting the trophy list to be leaked sooner rather than later.

What’s your take on another PlayStation classic making its way to the PlayStation 4? Are you excited to relive past memories or are you fed up with remasters? Let us know in the comments!