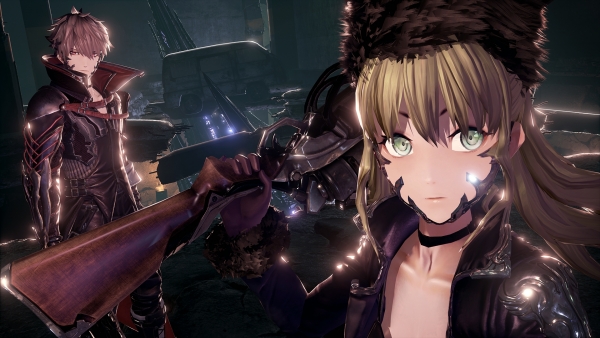 Bandai Namco has announced its brand new RPG, Code Vein. The game is slated to be released sometime in 2018 on “major home consoles.” Bandai Namco describes the game as a “grueling action-RPG” with a large emphasis on feasting on the blood of your foes and exploring a massive interconnected world.

The game takes place in the near future as a mysterious calamity ravages the world. The Thorns of Judgement pierce through the lifeless husks of old skyscrapers and cars litter the streets. Most of the worlds population has been exterminated, and the only survivors are the Revenants that have formed a society called Vein. The Revenant are ex-humans that have sacrificed their memories and gained a thirst for blood in order to receive Gifts of power. If they don’t feast on blood, they risk devolving into monsters known as the Lost.

Code Vein emphasizes its challenging combat and it’s bleak post-apocalyptic world. Thankfully, players won’t have to journey alone. Assuming the role of a Revenant, they will have to recruit the residents of Vein to assist them on their journey to discover a way out of this twisted reality. Players will use their Blood Veils to drain the blood of their foes to use abilities known as Gifts. Gifts have various effects from buffs, debuffs and using weapon abilities. The flexibility allows players to tackle any situation and adapt to play the game their way.

The game’s tone is immediately reminiscent of Bandai Namco’s flagship series, Dark Souls. However, the standout feature of the game so far seems to be its focus on the relationship between party members. It will be interesting to see how the game handles the interaction between characters. Between the wording of the press release and the images that have been shown to us, it seems as though Code Vein will emphasize the interactions between the player character and another party member in a one on one fashion. This intimate party design could be a catalyst for some very compelling story-telling in a world that will surely force you to rely on each other in order to progress. With the Revenant giving up their memories in order to obtain their vampire-like powers, it could be very interesting to see the player character and his party members slowly recover their memories about who they used to be and what happened before the world fell apart. Of course, this is all speculation at this point. I’m eager to learn more about this intriguing new IP and I’ll definitely be keeping my eyes on Code Vein in the coming months.