The Overwatch community was surprised with the announcement of the Overwatch League this past Wednesday, but the league’s legal department was given their own surprise. Major League Baseball is considering filing a trademark claim on the OWL’s logo, citing similarities in the designs.

According to law firm Morrison/Lee (which specializes in areas across entertainment, including video games and esports), trademarks approved by the United States Patent and Trademark Office are published in the ‘Official Gazette.’ Companies that believe that any trademark infringes on an of theirs have 30 days to file a claim. The claims go through the Trademark Trial and Appeal Board. The accusing party can either oppose the trademark or request time to file the opposition. MLB chose the latter on the last day possible to file a claim, and has 90 days to review a possible case.

The reason this is such a big deal, according to Morrison/Lee, is that the similar logos potentially lead fans to believe the MLB is involved. Fans actually coming to this conclusion is unlikely, but whether or not that is possible is up to the TTAB.

The logos are definitely similar. Both feature a rounded rectangle border, with a white-silhouetted player breaking up a field of two colors. The OWL features Tracer in front of a field of Orange and Black, the MLB a baseball player in front of Red and Blue. Both also have the name of the league underneath the logo. So, it’s entirely possible that Blizzard took some inspiration from the MLB. Are they a little too similar? Probably. Would that lead an esports fan to believe a totally different league from a different sport is involved? Probably not. 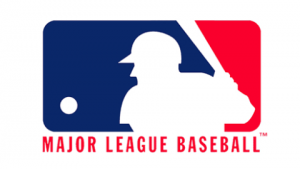 MLB didn’t seem to have a problem when the NBA released their new logo a year after they released theirs. The similarities are a little more striking here:

Major League Gaming also has taken inspiration from the logo, but received no trademarks claims:

It seems to be just the luck of the Overwatch League. Organizations have been dropping the game for months, and right when they get the league announced, they’re hit with this. Even if they’re forced to change it, those seven 20 million dollar league buy in spots will probably help them pay their creative team to make a new one.

BlazBlue Cross Tag Battle gets announced. Features RWBY, Persona and Under Night-In Birth
First Look at Ataribox, a Homage to the Classics