Danger 5: Five reasons why it’s the best show on Netflix

Danger 5: Five reasons why it’s the best show on Netflix

Danger 5 is one of those rare gems on Netflix that will have you obsessed and wondering where this show has been your whole life. Seriously. Imagine if Quentin Tarantino directed a live action combination of Archer and Team America: World Police that’s set in the 60’s. Danger 5 follows a group of five super spies who are tasked with preventing Hitler from taking over the world. So why haven’t you heard of Danger 5 before? It’s an Australian produced show that Americans haven’t been able to (legally) enjoy until last month when it was added to Netflix. Still unsure about Danger 5’s mix of silly satirical humor, absurd violence, and intentionally cheesy production values? What if I told you that Nazi dinosaurs are just part of what makes Danger 5 so great? Well here are five reasons why the first season will make Danger 5 your favorite show on Netflix:

Why yes, Hitler’s Nazi triceratops does in fact have machine guns strapped to its horns.

Danger 5 not only embraces absurdity; it runs with it, too! Our intrepid spies that feature such hilarious characters like Jackson, the super manly American who constantly butchers pronunciations, battle against Hitler’s rather unique forces every episode. See, Hitler (with help from historical figures like Stalin and Mussolini) apparently takes inspiration from the best 60’s sci-fi as the heroes in Danger 5 must go up against everything from Nazi dinosaurs to mutants and, yes, even robots. As if fighting such wonderfully ridiculous henchmen wasn’t good enough, the brilliant minds behind Danger 5 take it up a notch by bringing the Nazi creatures to life with (laughably) bad animation, costumes, and blatantly obvious use miniature models.

You may be familiar with the ‘Sensible Chuckle’ meme which has graced the internet courtesy of the wonderful shenanigans on Danger 5. But the ‘Sensible Chuckle’ magazine is not the only chuckle-worthy product placement in the show. Paying homage to (or perhaps taking a cue from) the classic comedy Airplane, every episode of Danger 5 features hilariously bad product placements for items that are worthy of late night infomercials. For example, the Mazzarucci Utility Guitar, an acoustic guitar that features swiss army knife style attachments and the sales pitch, ‘Whether it’s birthday, bar mitzvah, or just one of those special moments, the Mazzarucci Utility Guitar is the perfect gift for any occasion.’ In need of excellence in record keeping and prestige in the workplace? Danger 5’s Tannaka Paper weights are just what you need ‘because with Tannaka, what happens in Japan stays in Japan.’ Want to be the guy who always has time to look good? Check out the Mazzarucci Shave-issmo, an electric razor that promises to ‘redefine your face.’ It’s little nods like this that makes Danger 5 so special and keep you laughing throughout the outlandish and always amusing action.

Nobody knows where Pierre. Danger 5’s happiest agent, hails from because his accent is constantly changing between being Spanish, Italian, and French.

Since Danger 5 features some over the top Tarantino-esque violence, that means that death scenes are inevitable. Ordinarily that’s a (somewhat) sad event, but not in the Danger 5 universe! Whenever a character dies in the always smiling Pierre’s arms, their final words are always the recipe for ‘the perfect’ cocktail. Want to know how to make The Perfect Carlos Sultana? Take 1 part dark rum, 1 scoop vanilla ice cream, fill with creamy soda, and possibly finish with raisins and there you go! Need something to go with your Chinese take out? Try The Perfect Chinese Whisper (1 part rice wine, 1 part lychee juice, pour over crushed ice, and fill with the soda of your choice) that’s courtesy of the death of a Chinese hench woman. These Death Drinks are always relevant to that episode’s shenanigans and will make you thirsty anytime someone is bleeding in Pierre’s tender embrace.

Stereotyping is bad, m’kay? Well, except when it’s done on Danger 5. The way that cultural stereotypes are so gleefully and innocently lampooned on Danger 5 is really refreshing. For example, Danger 5’s take on an Italian hit squad. The Danger 5 team is being chased by a group of Italians in a small car. How did they know they were Italians? They were well dressed and the driver kept checking out his hair in the mirror, of course! In the Danger 5 universe, Germans are obsessed with talking German Shepherds who always play crooked cops in German police dramas. Even Ilsa, Danger 5’s bad ass Russian femme fatale confessed that she thought she’d die as a result of alcohol poisoning when cornered by a Nazi T-Rex. Even bad ass American agent Jackson’s hatred of Nazis is matched only by his love of cliched action hero one liners and impressing beautiful women. 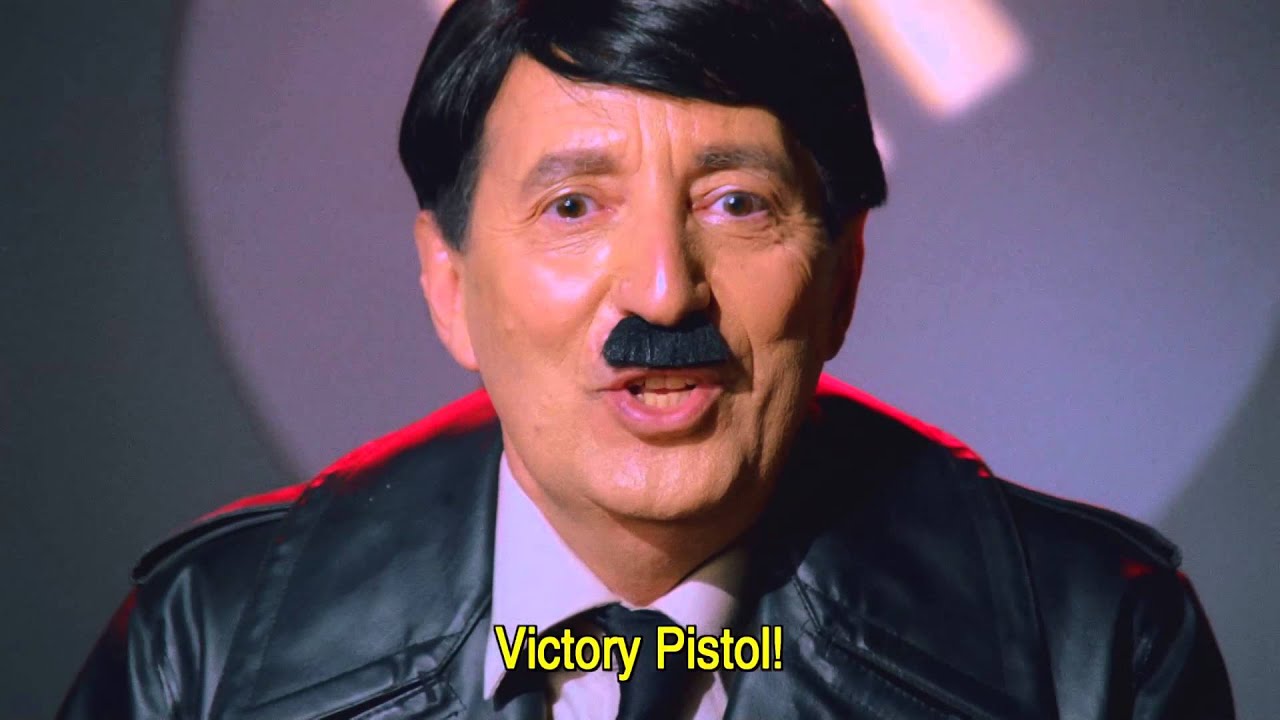 It’s the little things that really makes Danger 5 stand out. Everything from the harsh lighting, ridiculous costumes, constant chain smoking and intentionally clunky dialogue really shows the amount of love and attention to detail the show’s creators put in. Because of the larger than life shenanigans, you’ll definitely pick up on the small details on repeat viewings. How wildly absurd are the story lines? The show kicks off with the Danger 5 crew investigating the theft of the Eiffel Tower. Naturally, it was hauled away by swastika adorned zeppelins as a part of Hitler’s nefarious birthday scheme. As if that wasn’t good enough, Hitler escapes by jumping out of a window in every episode. Yep! That’s right, every episode uses the same b-roll footage of Hitler jumping out of a window when he invariably escapes.

Another enjoyable little quirk is that every character on Danger 5 appears to be fluent in every language. Hitler speaks German, Danger 5’s Ilsa speaks only Russian, Hirohito speaks Japanese, etc. requiring the use of subtitles for their lines. It’s a wonderful oddity that makes it all the more humorous that all the show’s dialogue (even English) is badly dubbed over. Danger 5 also pokes fun at the ridiculous sexism of the time by having Danger 5’s brainy blonde British scientist, Claire, constantly shut down by the brash eagle-headed Colonel Chestbridge during briefings. The show’s creators didn’t just pay attention to the jokes and action. The catchy retro soundtrack that accompanies the harshly lit shenanigans on Danger 5 is fantastic and shows that they really thought of everything. Seriously, you can see why Danger 5 is one of the best things to come on Netflix in a long time.

Check out the trailer for Danger 5 and start counting down the minutes until you can get home and binge watch it on Netflix:

The true meaning of life: its hidden messages
343 Industries Update on the Addition of Halo 3: ODST to the Master Chief Collection