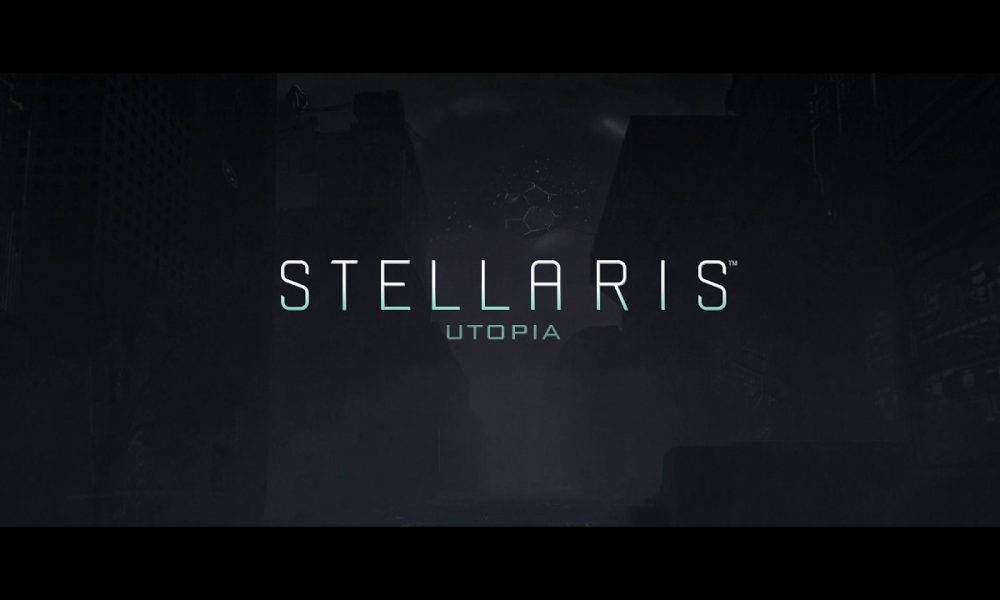 The Utopia expansion is the first major addition to Paradox’s awesome space Grand Strategy game is going to hit our digital shelves on the 6th of April. As is tradition for Paradox, the DLC will be accompanied by a free patch that will also include some pretty hefty changes in its own right. Paradox have previously released some smallish DLC, including the awesome Leviathans, that added ancient space horrors and orders to the game.

Lets start with the Utopia expansion. One of the more talked about features is the ability to build vast orbital habitats and structures, including Dyson spheres. This will hopefully go some way to mitigating the expansion problems pacifist empires face when boxed in and will give more scope to building “tall” crowded empires, as opposed to vast sprawling ones.

The Utopia expansion will also improve the slavery feature. No more will your slaves be condemned to simply work the mines, now you can be far more… Inventive. You can chose the kind of enslavement for a population; you can turn them into domestic servants, battle thralls, or into livestock to produce food to fill the bellies of your people. It will also add in a number of new purge options. You can choose to simply wipe a peoples off the map if you so wish, but now you can also force unwanted pops from your border or place them into labor camps or turn them into burgers… Paradox really went in for the whole cannibalism thing this time.

The real star of the Utopia expansion is the Ascension perks. These are special traits that your empire can acquire that will help you with different play-styles and goals. These perks will really help define the feel of your empire and will give you access to three new “paths” in the end-game. Will you shed your weak flesh and become truly cyborg? Perhaps you wish to master your mind and develop your species latent psionic abilities? Or will you bend your own flesh to your will, twisting and warping evolution to suit your needs or desires?

Have you ever wanted to be the all consuming horror of the universe? Well Utopia will also let you do that. You can turn your species into a hive-mind. Your species will be one, posses a single unshakable will, there will be no dissent or unrest. The down side? Other species really don’t trust you and your pops can only survive on hive-mind worlds. That and if you have any non-hivemind pops in your empire then your species will… well… Eat them alive…. So much cannibalism Paradox.

The Banks expansion will be released alongside this DLC, providing a number of features for everyone who owns Stellaris, regardless of whether they own Utopia or not.

The tradition trees are similar to the Ascension perks in that they offer ways for you to customize your empire to your liking and play-style, they’ll help you research tech faster or build a better navy, it should help give individual empires more character.

Ethics are also getting a major rework. In the past ethics drift was pretty random and led to some somewhat odd results. Now it is tied to an “attraction” value that dictates how likely a population is to adopt a specific ethic. If you fight a lot of wars then your people are naturally going to become more militaristic. This is great because it also ties heavily into the new faction system. New factions will form around ethics and lobby your government to pass policies that suit their world-view. If you fail to satisfy these demands, it will lead to unrest that could result in rebellion.

You will also have new ways to approach the species in your empire. You’ll be able to define specific rights, give them automatic citizenship, military citizenship define whether they are allowed to migrate around your empire or join the military. You can even say how many children you will allow them to have.

All these changes will allow players to build the harmonious Utopia of the future. I mean, it will also let them build dystopian nightmares, but whatever works… Right?