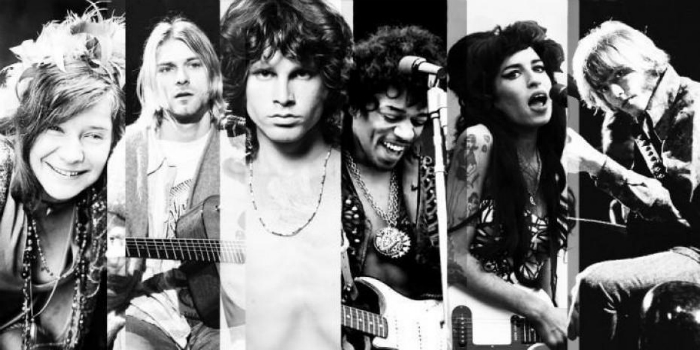 Throughout the music history some inexplicable incidents occurred to musicians that led fans to think that they are in fact, cursed. Most of them are unfortunate incidents caused by poor choices they’ve made throughout their careers but some of them can only be explained by the supernatural. All that being said here are some of the worst curses.

Some people might find 27 as their lucky number but some very well known musicians have unfortunately died at age 27. I am talking about Janis Joplin, Jimi Hendrix, Jim Morrison, Brian Jones, Kurt Cobain, Amy Winehouse and Robert Johnson. What all of these artists have in common is that they’ve all lived a very intense and passionate life. This is considered by all skeptics a coincidence but is it really?

Robert Johnson’s deal with the Devil!

It is said that Robert Johnson, whose technique has influenced a lot of rockers, had made a deal with the Devil to gain his incredible musical abilities. The main reason why everyone thinks that this is true is because other artists that have covered his song “Crossroads” had a series of unfortunate events afterwards. The funny thing about it is that a deal with the devil can only be made at a crossroads and that might be why that particular song is cursed. And who knows, maybe he started the curse of 27 in the music industry.

The “My Way” curse

It seems that the very famous song written by Frank Sinatra and Paul Anka its surrounded by death. So many people have died during bar fights while Frank Sinatra’s song was playing that in some bars from Philippines it was banned. But also, there have been reported deaths by natural causes like strokes while the deceased were listening to “My Way”. I know what I won’t be listening tonight.

One of the bands that enjoyed playing “Crossroads” live were probably touched by the curse in 1977 when their plane crashed in the Mississippi swamps. Van Zant, Gaines and his sister Cassie and manager Dean Kilpatrick died instantly while the others had survived. The remaining band members had suffered from physical and emotional trauma which led to alcohol and drug abuse.

These are just some of the curses recorded throughout the music history but this 4 seem to be the most haunting and realistic ones.