The first human head transplant will be performed in 2017 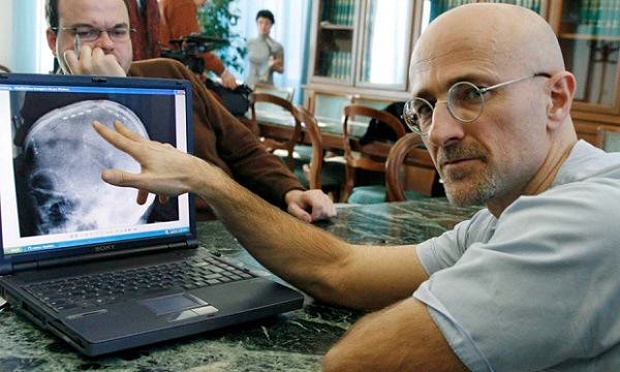 The first human head transplant will be performed in 2017

You probably heard this news earlier this year – the first human head transplant will be performed by an Italian neurosurgeon on a paralyzed Russian man. The head transplant is scheduled for December 2017.

The 30-year-old Russian volunteer is called Valery Spiridonov and he suffers from a rare motor-neuron condition, the Werding-Hoffman Disease. This disease causes motor neurons to deteriorate, eventually leading to muscle atrophy, difficulty in swallowing and breathing. There’s no cure for the condition. “When I realized that I could participate in something really big and important, I had no doubt left in my mind and started to work in this direction,” said Spiridonov, a Russian computer scientist.

The real-life Doctor Frankenstein who will perform this more than controversial procedure is Dr. Sergio Canavero, Director of the Turin Advanced Neuromodulation Group. In the last 30 years he researched many ways in making the first human head transplant a reality. Spiridonov is optimistic, if not enthusiastic regarding the transplant – “according to Canavero’s calculations, if everything goes to plan, two years is the time frame needed to verify all scientific calculations and plan the procedure’s details. It isn’t a race. No doubt, the surgery will be done once the doctor and the experts are 99 percent sure of its success.”

The procedure looks like it’s taken from a horror movie – Spiridonov’s head will be cooled off, severed and attached to a donor body, also cooled, to preserve the quality of the cells and tissues. The two most difficult tasks will be to reattach the spinal cord and the risk of the new body rejecting the head. Doctor Canavero is optimistic; the advances in medical science will reduce the risk of rejection. On the other hand no doctor has successfully reconnected a human spinal cord.

For this dramatic head transplant procedure, Doctor Canavero is teaming up with a neurosurgeon from China, Doctor Xiaoping Ren. He performed head transplants on over 1,000 mice. The mice were able to breathe, see and drink, but they survived no longer than just a few minutes. For this particular head transplant, the team of surgeons will use polyethylene glycol a compound used to fuse fatty cell membranes, in order to properly reconnect the spinal cord.

The scientific community is highly skeptical, if not shocked at this procedure. They consider it not only unethical, but impossible – “This is such an overwhelming project, the possibility of it happening is very unlikely,” Harry Goldsmith, professor of neurological surgery at the University of California, Davis, told The Guardian newspaper.

It is true that only the idea of a human head transplant is outlandish and raises many ethical and technical problems – the possibility of survival is dim, and if the donor survives how will its personality manifest? But other people, like Spiridonov think that the procedure is worth the risk. Only time will tell if this human head transplant will be achievable.