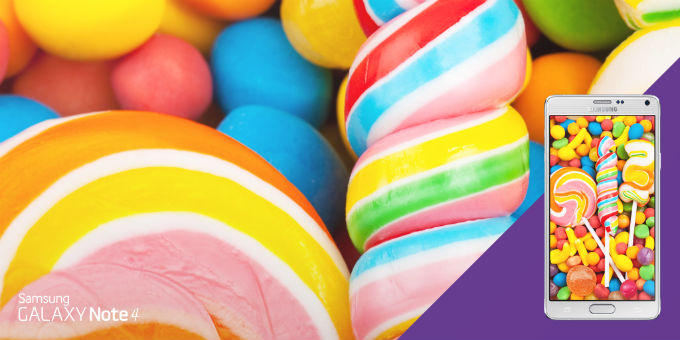 Android 5.0 Lollipop was launched alongside the Nexus 6 and Nexus 9 on October 15, and the new mobile OS is supposed to be Google’s best ever. From what we’ve already seen, Android 5.0 Lollipop looks great with the new Material Design interface. Google announced that devices in the Nexus line, such as the Nexus 4, Nexus 5, Nexus 7 and Nexus 10 would be the first ones to receive the Android 5.0 Lollipop OTA update early in November. After the Nexus devices, other Google Play Edition gadgets and smartphones like the Galaxy Note 4, Galaxy S5, HTC One M8, OnePlus One and Moto X are in line for the update. The Galaxy Note 4 is currently the most talked about phablet on the internet, and it’s also among the first which will be getting Lollipop aside from Google’s own.

Google said that Lollipop would begin its rollout soon, and major devices like the Galaxy Note 4, HTC One M8, LG G3 and others should receive the update within 90 days counting from October 15. With the new murmurs coming from Samsung, the Galaxy Note 4 could be pushed to the top of the Android 5.0 Lollipop update list. Many are hoping to get their hands on the Galaxy Note 4, even if it is an expensive device, retailing from $700 for the off-contract version. In any case, the Galaxy Note 4 is definitely Samsung’s greatest work so far, with great stylus integration, revamped TouchWiz UI and beautiful screen, as well as an enduring battery. We are curious to see how Samsung will integrate TouchWiz into Android 5.0 Lollipop, but it did a fine job on the Android 4.4 KitKat with which the Galaxy Note 4 comes out of the box.