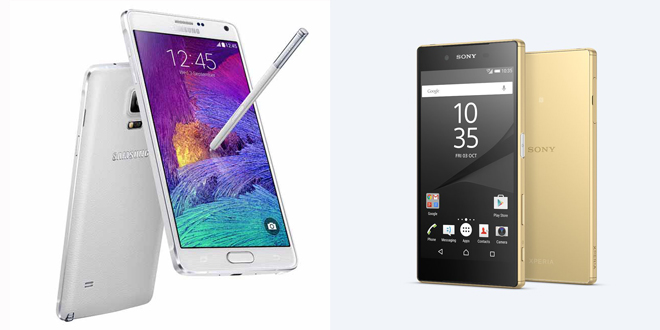 In June this year Sony released the Sony Xperia Z3+ as a response to Samsung’s Galaxy S6, which has taken over the market ever since April. Unfortunately, the Xperia Z3+ failed, as it didn’t reach its competitor’s standards and even more, it had some major issues with overheating. Sony didn’t give up the fight and announced, during the IFA press conference, three new phones: Xperia Z5, Xperia Z5 Compact and Xperia Z5 Premium.

The first big difference between the two phones is their design. Like any other Sony devices, the Xperia Z5 has a more “boxy”, rectangular design and seems to be made out of a metal case, but in fact it’s made out of frosted matte glass, which gives it a mirror like effect. As for Samsung’s Galaxy Note 5, it is slimmer, curvier and looks more stylish than Xperia.

Both devices use Nano-SIM cards and have fingerprint sensors implemented, but Xperia comes with an improved feature, it is IP68 certified, meaning that it is dust proof and water resistant. Sony’s Xperia Z5 resists 30 minutes immersed in liquid over 1.5 meter. On the other hand, Samsung Galaxy Note 5 comes with an S Pen Stylus, which has a click-in holster, a recessed button and an updated S Note app.

Two different styles of smartphones have to come with two completely different displays. The Note 5 has a 5.7” Super AMOLED display with 16M colors and capacitive touchscreen. With 1440×2560 pixels resolution and the corning Gorilla Glass 4, Note 5 rightfully deserves is phablet title. As for Xperia Z5 it has a 5.2” IPS LCD display with similar 16M colors and capacitive touchscreen. As for the 1080×1920 pixels screen, it is actually made out of scratch resistant glass that has an oleophobic coating. If not by size and design, Xperia Z5 seems to be more durable that its competitor.

To reach expectations, Xperia Z 5 was equipped with powerful specs, that are close to the best on the market today, while Note 5 kept its renowned highly performant specs.

Although the processor’s capabilities don’t compare, Xperia Z5 wins when it comes to storage capacity, which is really valued by most smartphone users. But Note 5 is the only smartphone that lets you write by hand. By being high performant phones, they both support 4G connectivity and have the same Wi-Fi 802.11 a/b/g/n dual-band connection. With GPS incorporated, but with a small difference in Bluetooth connection, as Xperia Z5 has a 4.1 Bluetooth incorporated, while Note 5 has the 4.2 version, the smartphones seem to be slightly different.

Both phones seem to have downgraded batteries in comparison to their predecessors, both with different advantages and disadvantages. Xperia’s Z5 non-removable Li-Ion 2900 mAh battery, can last up to a day and has various energy saving modes installed and more importantly it has a fast battery charging feature, as it brings your battery up to 60% in 30 minutes. But, it cannot be charged wireless like Galaxy’s Note 5 non-removable Li-Po 3000 mAh battery, can be. Although Note’s 5 battery lasts an average of 15 hours, it did beat its predecessor average of 12 hours. With various power saving modes and the wireless charging capacity, the battery’s life might not seem to be less functional than that of the Xperia.

When it comes down to software, both devices are built to be compatible with the Android 5.1.1 Lollipop Operating System and are added on the list of smartphones that will receive the updated version of Android OS, the 6.0 Marshmallow.

Conclusion
Overall, Samsung Galaxy Note 5 is an excellent smartphone with a premium price, the 64 GB version having a $800 price range, while the 32 GB costs roughly $700, but storage is needed as the phablet doesn’t support microSD. Also, it doesn’t seem to be very much upgraded in comparison to the last years Note 4 model. Although, that writing by hand feature does make it unique.

As for the Sony Xperia Z5, the difference is huge when it comes to its failed Xperia Z3+ version. Although specifications are not highly improved, the overheating issue promises to be resolved. The price range is similar to the Note 5, being situated in the $700 range, depending on the region it is sold in, some discounts were made to attract customers, as the phone was released pretty late and doesn’t offer much more than the Samsung Galaxy S series.

In my opinion, both smartphones are amazing, yet different in so many ways. At the same price you can either have a better performing Samsung Galaxy Note 5, but it will lack in storage capacity. While, Sony Xperia Z5 has storage problems covered and also offers the possibility of taking high quality and underwater photos. In the end it depends on what you expect from your phone and probably what kind of design suits your preferences more.