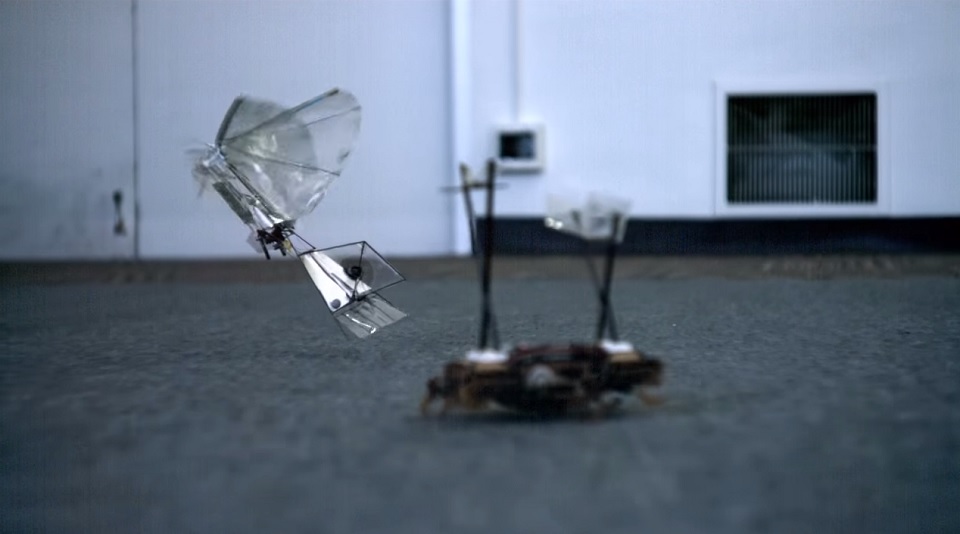 When trying to figure out new designs for their machines, engineers often look to nature for inspiration. A team at UC Berkeley has not only created a couple of animal-like robots, but has also demonstrated how different kinds of robots can collaborate, greatly enhancing their capabilities when doing so. The pair consists of a speedy six-legged robot called VelociRoACH and an ornithopter (aircraft which flies by flapping its wings) micro-aerial vehicle (MAV) dubbed the H2Bird.

Powered by a 3.7 V, 120 mAh battery, VelociRoACH weighs 30 grams and can reach a top speed of about 2.7 m/s (the speed of a human jogging). Like all legged robots, it’s great at crossing over rugged terrain, even better that its wheeled or tank-tracked counterparts, however it’s not going to be very useful if you need it to get past a tall obstacle. Here is where the H2Bird comes in, a bird-like MAV which tips the scales at13.2 grams and has a wing span of 26.5 cm. It can operate for about two and a half minutes thanks to its 3.7 V, 90 mAh battery, but doesn’t have enough power to get off the ground even when flapping its wings at a maximum of 16 Hz (16 times per second).

That’s why collaboration is so important here. When mounted on the VelociRoACH, the H2Bird gets just enough forward velocity to take off, allowing it to then go where neither of the two robots could have gone on their own. It’s also important to point out that when working together, the machines use about 25% less energy than if they had traveled separately. So it seems that creating groups of robots, each with their own “specialty,” seems to be a better, more efficient design decision than creating a single unit with multiple functions.

Seeing machines working together, plus the looming prospect of artificial intelligence probably makes you think Skynet, though it probably shouldn’t – at least not any time soon. For now, this promising area of robotics looks like it has plenty to offer and is definitely worth exploring further.

MIT’s Robot Cheetah Can See and Jump Over Obstacles
NASA unveils flying saucer technology, to be used for the 2035 manned mission to Mars