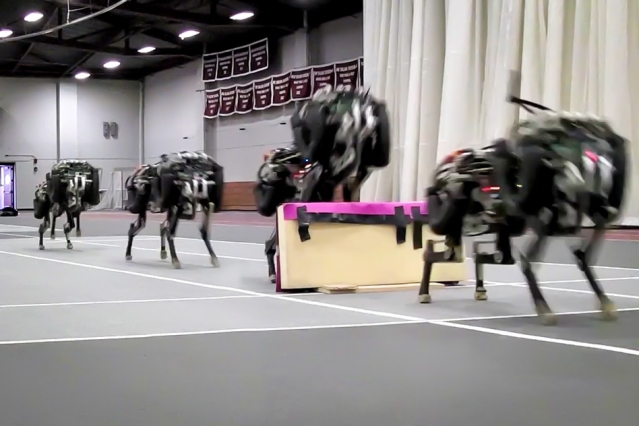 MIT’s robot cheetah has taken its next step towards world domination, it’s now able to jump over objects while running

MIT’s robotics lab is constantly doing their best to push the field of robotics to greater heights. Searching for ways to make robots that can do everything that science fiction geeks dream of such walking, talking, and thinking for themselves. According to a video posted to MIT’s YouTube page they’ve gotten closer to the thinking and walking part of the equation.

A video has appeared showing new tricks that MIT’s robot cheetah has picked up. Called the Cheetah 2 robot it is a huge jump forward forward for robotics, literally. In the video we see the cheetah robot running along a treadmill in an indoor gym at around 5 miles per hour (8 kilometers per hour) and jumping over obstacles. Using skills that no robot has ever truly mastered before.

This new found ability to run and jump is all thanks to new algorithms developed by researchers at MIT that allows the robot to basically see obstacles in front of it. In fact the Cheetah 2 robot can see obstacles the same a human can if not better, able to judge its heath distance to perfectly time its jump, landing without fail. What makes the feat all the more impressive is that this robot cheetah can make all of those calculations in 100 milliseconds.

During testing on the indoor treadmill and indoor track the Cheetah 2 Robot was able to leap over obstacles 18 inches high, half of the robot’s height, without ever slowing down. That makes the robot cheetah the first four legged robot able to run and jump over obstacles on its own and the video drives how how impressive that feat is. Anyone whose interested in learning more about the science behind those new tricks can head over to MIT’s blog and learn what researchers have planned for the robot cheetah next.