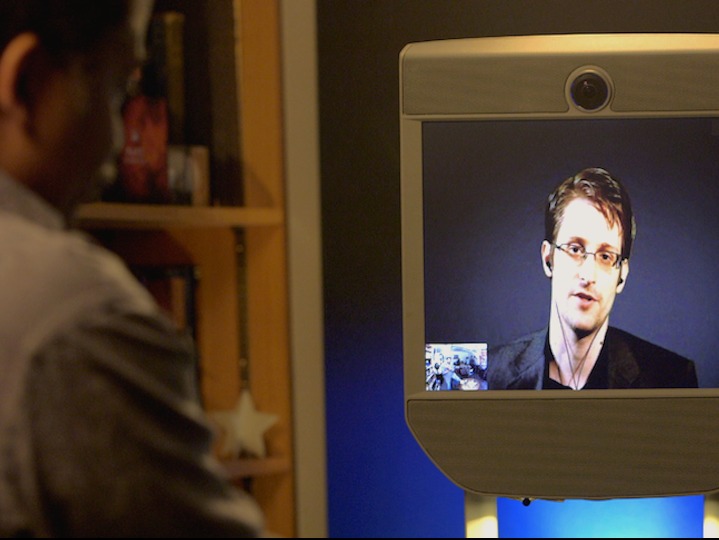 Everybody heard about Edward Snowden, the famous whistleblower that in 2013 leaked classified secret documents, revealing the US government mass-surveillance program on its own people, through phone records and without their knowledge. Since then, he is one of the most wanted men in US, charged with espionage and theft and resides in Russia, after he requested asylum.

The former CIA employee appeared as a guest on astrophysicist and science communicator Neil deGrasse Tyson’s StarTalk podcast. Snowden used a robot video link, called a “beam remote presence system” that he could control from Moscow and entered into Tyson’s office at the Hayden Planetarium in New York with his face displayed on the screen.

The two had a candid conversation, with subjects ranging from the difference between education and learning, the Periodic Table, Isaac Newton, to data compression, cybersecurity and encryption. Tyson then asked Snowden how encryption could be linked to communication with…alien civilizations. Snowden responded that encrypted data might make it difficult to detect alien messages.

“So if you have an alien civilization trying to listen for other civilizations, or our civilization trying to listen for aliens, there’s only one small period in the development of their society when all of their communication will be sent via the most primitive and most unprotected means. So when we think about everything that we’re hearing through our satellites or everything that they’re hearing from our civilization (if there are indeed aliens out there), all of their communications are encrypted by default. So what we are hearing, that’s actually an alien television show or, you know, a phone call… is indistinguishable to us from cosmic microwave background radiation.”

The cosmic microwave background radiation is a remnant radiation from the Big Bang, which is detectable throughout the Universe. It’s like a static sound. If Snowden’s assumptions are true this means we don’t even realize that we received alien communications, because they are so strongly encrypted. At the end of the dialog, Tyson joked about the possibility that aliens could have the same security problems as we do, as to protect their communication through heavy encryption. “Only, if they have the same security problems as us.”