Stellar battery life and performance for only $121 unlocked

Stellar battery life and performance for only $121 unlocked

Doogee is branching out and has launched an entirely new brand of smartphones: battery life champions HomTom HT5 and HomTom HT6. Both these smartphones aim to revolutinonize the way in which we perceive good smartphone battery life with anticipated autonomy of about a week with regular usage, which is outrageously good. The HomTom HT6 is on offer on Everbuying right now, from whom you can get the device for only $121 if you use the coupon code EVHT6 at the check-out page.

The HomTom HT6 features a massive battery that should be responsible for the stellar battery life that the company is advertising. The cell measures a whopping 6250 mAh, which one would regularly see in tablets larger than 10 inches. With that massive battery, one would expect the phone’s design to take a serious hit, but the HomTom HT6 bypasses that pretty nicely. While one would expect the phone to be as thick as a book, it actually only measures nearly 1 cm. That’s not that bad, although we have gotten used to devices that measures less than 6 mm. 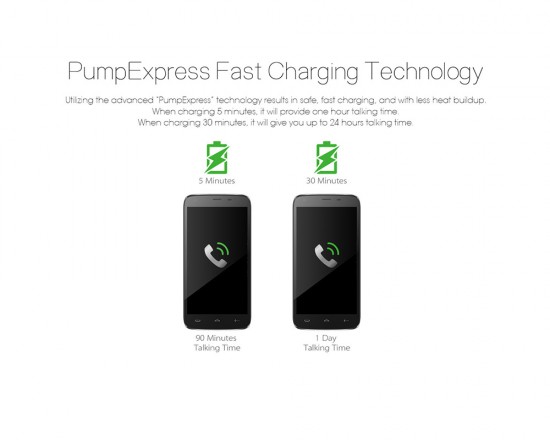 Regardless, battery life is the selling point of this point and for its price, the battery is already paying for itself. The phone has other features to boast with, and they’re not negligible at all. First off, it has a massive 5.5-inch display with a resolution of 1280*720, which while not flagship material puts the phone’s resolution at a comfortable ppi pixel density. A MTK6735 processor backed up by 2 GB RAM and 16 GB expandable internal storage are behind performance, and the 64-bit processor running Android 5.1 Lollipop should offer seamless user experiences.

The camera setup is probably the weaker point of the HomTom HT6, sporting an 8 MP camera with flash and autofocus on the rear and a 2 MP camera on the front. The camera setup is balanced out by Bluetooth 4.0, 4G LTE, an array of sensors, dual-SIM capabilities and of course, stellar battery life with fast charging included in the mix. Autonomy is what this phone should champion at and that should be the reason for buying it. The decent specs and performance can be seen as a bonus next to the week-long battery life. Any takers?