Although Cyber Monday and the seasonal shopping spree is coming to a close, retailers are still extending their Cyber Monday sales so that those who couldn’t take advantage of the weekend deals can still benefit from deals and discounts for their Christmas shopping list. GearBest has also extended their Cyber Monday sale through a couple of coupons if you’re still looking for a TV box for your living room.

We’ve selected two of the best deals GearBest has on TV boxes running Android, so you won’t have to browse through the tens and hundreds of options the retailers puts at our disposal. In comparing the two discounted TV boxes, you’ll get a better idea of what your needs are and how these gadgets could meet them.

The MX Plus is a popular Android TV box that you can buy for $43 from GearBest if you use the coupon code GBMX at the checkout, featuring a full Android 5.1.1 Lollipop operating system and a slim design that fits into your living room or even behind your TV. Turning any HDTV into a smart TV, the MX Plus is a simple, yet versatile gadget that aims to facilitate easy and customizable access to streaming media, games and apps.

Featuring new technology, the MX Plus TV box comes with an Amlogic S905 CPU which is supposed to be 20% more powerful and power-efficient than previous models of CPUs from Amlogic. The Cyber Monday deal includes this model because it’s a recent release and it supports 4K content, which is a very sought-after trait in modern homes nowadays. Backed by 1 GB RAM, Mali-450MP GPU and 8 GB expandable storage, with XBMC and Kodi support, the MX Plus is a versatile and balanced gadget.

Connectivity-wise, the TV box features many ports and interfaces and praises itself with an HDMI 2.0 port that transfers lossless video output. Wi-Fi, HDMI 2.0, 2xUSB 2.0, USB 3.0 microSD slot, Ethernet port, SPDIF port and an optical port are all part of the design of the gadget. Moreover, included in the box you will find a remote control to make interacting with the device that much easier from the get-go, leaving room for additional accessories like joysticks to be added later on. The only thing missing that I would have liked the MX Plus Android TV box to have is Bluetooth, so that you can connect wireless accessories easier. For the price, however, it’s a pretty neat Cyber Monday deal. 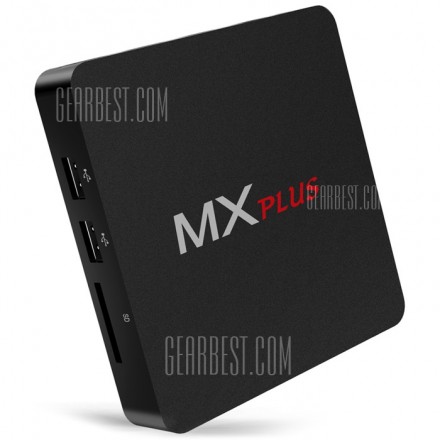 The Sunvell T95 TV box is the second Cyber Monday deal we picked in the Android set-top box category, because this one has a couple of extra features that are well-worth the extra price tag. The price difference between the MX Plus and Sunvell T95 isn’t that big, seeing as the Cyber Monday sale brought down the price of the Sunvell T95 to $51, with free shipping included in the mix and you can buy it from GearBest, too.

The biggest and most obvious difference between the two Cyber Monday deals is design. The Sunvell T95 comes with a more traditional design that resembles routers rather than set-top boxes, but it features an LCD display up front that acts as a daydreaming watch, so you can see the time even when you’re watching TV, without having to unlock anything or press any buttons. The feature is small, but in my mind, significant and interesting – seeing as most TV boxes don’t feature any kind of display.

Under the hood, the Sunvell T95 and MX Plus TV boxes have a few things in common, but the former adds the Bluetooth 4.0 that’s missing from the latter. The same Android 5.1 OS is on board the device, and Kodi is also pre-installed, although XMBC is not part of the package – you can install it yourself. The same Amlogic S904, backed by an inferior GPU, the Mali-450 basic are running the show, which means that while 3D video is a possible experience and 2K output is wonderful, 4K output won’t be as crisp and detailed as on the MX Plus TV Box.

Dual-band Wi-Fi, 1 GB RAM, 8 GB expandable memory, infrared remote control (in the box), OTG, 2x USB 2., AV, LAN and HDMI are all part of the port line-up and features of the Sunvell T95 TV box Cyber Monday deal. For the extra bucks, you’re getting a different, more traditional design, with Bluetooth 4.0 added for convenience. So with all that being said and the differences between the two Cyber Monday TV box deals pretty much explained, which of these do you think is the better option?