Cubot X16 now up for pre-order

Cubot X16 now up for pre-order

Cubot is an emerging name in the European and Asian markets and while the manufacturer has been focused on high-end tablets lately, they’ve also launched the Cubot X16, an interesting new mid-ranger. The Cubot X16 is up for pre-order on BangGood, from where you can get it for $140. Those in Europe have the benefit of the phone being available in the European warehous of the retailer, so they’ll be first to get it on November 7, when it should start shipping. Cubot is a Xiaomi competitor who has made a name for itself with its dual-boot and performance-oriented tablets.

There are 200 units of the Cubot X16 that will be available at the launch price. After these units are sold out, $20 will be added to the pre-order price, so we suggest that if you’re interested, you get your order in early. The Cubot X16 comes with a 6.2 mm thin zinc-alloy body (although the promo pictures do insist on Zinnic) which looks rather premium. There are thin bezels on the side and symmetrical ones on the top and bottom, which make the device pretty appealing. It’s edges are reminiscent of Sony’s Xperia Z3 line-up of devices, while its back is coated with a gripped material. 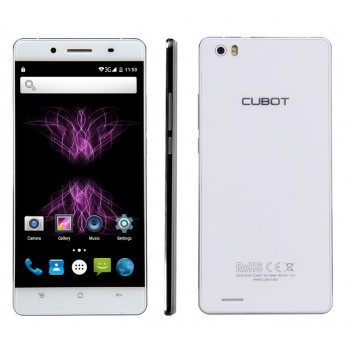 Up front, the Cubot X16 sports a 5-inch 1080*1920 resolution 2.5D touchscreen. Under the hood, Android 5.1 Lollipop is on top of things, backed by a  MTK6735,Quad-Core, 1.3GHz CPU, 2 GB RAM and 32 GB internal storage. There are two SIM slots available, one of which doubles as a microSD card reader for storage expansion. The rear camera measures 13 MP and comes with a dual-tone flash and f/2.0 aperture, while the front camera is a 5 MP f2.4 shooter. 4G LTE and Bluetooth 4.0 are both available, alongside a 2500 mAh battery which is sealed in, unfortunately. BangGood also include an extra case and screen protector in the Cubot X16 box, so it’s a pretty decent deal.

The Cubot X16 is a well-balanced mid-ranger with a stunning display and design, capable camera and decent performance. The battery life of the device should be decent enough based on thsoe specs, but we should withhold judgement on that until we can spend more time with the device. Overall, the handset looks rather nice and it might be one of the best-looking mid-rangers I’ve come across so far. HTC’s One A9 looks rather unappealing next to this, if I think about it. Any takers?